The Legacy Of Jane Austen 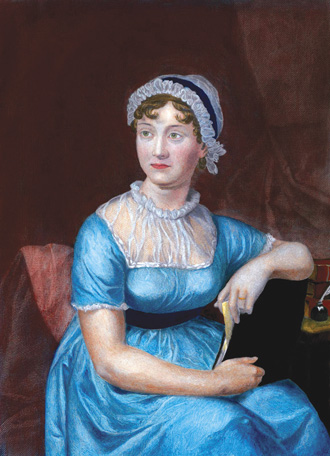 Regarded as one of the greatest English authors of all time whose novels have been adapted for movies and TV no less than 40 times, and yet Jane Austen died in obscurity – 1817.

She was the supreme social satirist who possessed a sharp tongue, a caustic wit and a great sense of humor- and yet her name was unknown in her lifetime. Countless biographies written on her life and work abound, and yet so little is known about her- providence would leave little trace of her short life: she left no diary and most of the 2000 letters she wrote to her beloved elder sister, Cassandra, were burnt on her death. The only accepted real portrait of her, an unflattering water color painted by her sister, is all historians could use. (Over the years more complimentary images of her have appeared on bank-notes, stamps and publications.

And so why is Jane Austen one of the most celebrated authors, whose novels, written over 200 years ago, transcend time? Throughout her six great novels, written with both reverence and ridicule, her observational skills showed her keen appreciation of the absurdity of others- their pretentiousness, their affectation and their insecurities, which, to her credit, amused rather than annoyed her. A common theme throughout her novels is the importance of marriage. Romance is central- the pursuit of true love was often depicted with rejection, turmoil and heartbreak, but leaving the characters triumphant in the end. Family upheavals, unrequited love, social standing disparity, she lets the characters actions and their diction carry the story with both kindness and mischievousness.

The well spring of her writing was her attitude that comedy is ‘the saving grace of life’. Regarded as her greatest novel throughout the world is ‘Pride and Prejudice’, the irony of which is that she sold the copyright to a publisher for 110 pounds sterling- had she sold the book on a commission basis, common in those days, she would have made a profit of 500 pounds- twice her father’s annual income.

Here are some famous quotes, both from her (to her sister) and some from the characters in her novels.

“Vanity and pride are different things…..a person may be proud without being vain. Pride relates more to our opinion of ourselves; vanity, to what we would others think of us”

“I do not want people to be agreeable, as it saves me the trouble of liking them.”

“Friendship is certainly the finest balm for the pangs of disappointed love.”

“Those who do not complain are never pitied.”

“Seldom, very seldom, does complete truth belong to any human disclosure; seldom can it happen that something is not a little disguised, or a little mistaken.”

“Single women have a dreadful propensity for being poor which is one very strong argument in favor of matrimony.’”

Jane Austen, died on 1817, aged 42. She lies in Winchester Cathedral, Hampshire. England. Her last two novels were published after her death, and the author, hitherto anonymous –written by ‘A Lady’- would now be known by her real name.