The Hemingses Of Monticello 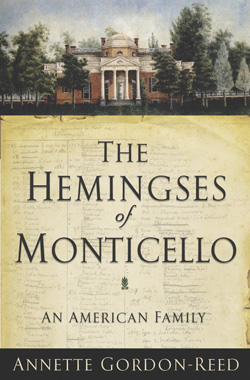 The sub-title of THE HEMINGSES OF MONTICELLO is “An American Family.” The first known member of that family was a young African woman who was impregnated while being transported to slavery in America in the 1730’s, She named the daughter she bore Elizabeth Hemings, using the name of the ship’s master, Captain Hemings, the white father of the child.

Elizabeth became the matriarch of a large family of Virginia slaves who became lighter-skinned with each generation fathered by white men. How they settled on Thomas Jefferson’s plantation and how the sons and daughters, half-brothers, sisters, cousins, aunts and uncles interacted in slave culture is a fascinating story told by Annette Gordon-Reed.

Elizabeth Hemings grew up on the plantation of John Wayles, rich owner of much land and many slaves. He was an Irish immigrant who married a Virginia woman with inherited property. They had several children before her death, including an attractive daughter named Martha Wayles, who later met and married Thomas Jefferson, a prominent Virginia politician at the time. She brought along Elizabeth Hemings and her several small children fathered by Wales, when she moved to Monticello. The children’s grandfather and their father were both white men whose genes gave the young slaves very light complexions. They received special status on Jefferson’s plantation, living in the immediate vicinity of the big house rather than in cabins near the fields. The children were half-brothers and half -sisters of Martha Wayles Jefferson.

Jefferson was devastated when his wife died after bearing several of his offspring. When he was appointed by President George Washington to be Ambassador to France, he took one of his daughters and one of Elizabeth’s sons with him to Paris, leaving the younger children with their aunt. He placed Martha (named for her mother) in a Catholic boarding school in Switzerland, and apprenticed James Hemings to become a French Chef.

On later hearing that one of the children left behind had died, he sent for his other daughter to join him. He asked that she be chaperoned across the Atlantic by an older slave woman, but apparently the only slave available was just thirteen-year- old Sally Hemings.

The boat trip was long and hard for the nine-year- old child and the pretty teenager, but they eventually made it to Jefferson’s luxury hotel residence. He sent his daughter to school with her big sister in Switzerland and kept Sally in Paris where she was delighted to be reacquainted with her older brother, James Hemings.

During the next five years, Sally enjoyed her Paris freedom while she did her master’s mending and handled his personal needs. Their relationship became closer and by the time they returned to Virginia Sally was pregnant. He had promised that any children she bore would be free when they were adults. He intended to return to Paris, but President Washington persuaded Jefferson to become Secretary of State and come to Philadelphia. Sally remained at Monticello in her own living quarters and served him on his visits home.

I thoroughly enjoyed this well-written book about the many descendants of Thomas Jefferson and the two attractive half-sisters who partnered with him, although the genealogy of the clan was at times confusing. The interaction between slaves and free society in that era was particularly revealing. Slaves were subjected to laws different from those of free men in spite of a line in the constitution that said “all men are created equal.”