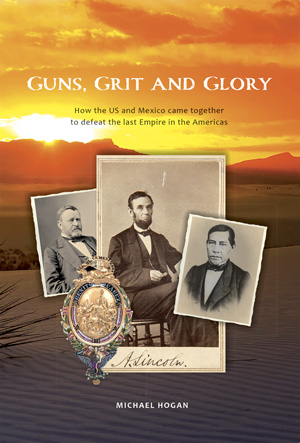 If you are a history buff or an antique gun enthusiast, or simply a lover of good stories, you have cause to be happy today because Michael Hogan has written a new book: Guns, Grit, and Glory: How the US and Mexico Came Together to Defeat the French. Yes, that would be the same historian whose 2016 book Abraham Lincoln and Mexico debuted to wide acclaim both in and out of academe. It was nominated for the William M. LeoGrande Prize for the best book on U.S. Latin American relations.

In my review of that book, I couldn’t help but enthuse about the detailed information in the form of letters, manuscripts, primary source documents, diaries, and contemporary periodicals Hogan included. He’s done the same in this book with the added benefit of colored photos and paintings, maps of the battlegrounds, and detailed photos of 19th century ordinance. But it’s not just the methodology that impresses the reader, it’s the graceful writing that draws us into the events, attitudes, and thinking of a period before, during, and after the Civil War (1861-1865):

Many monarchs felt that the US would be so preoccupied with holding their fragile Union together that they would have neither the will nor the resources to enforce the Monroe Doctrine which prohibited further European interference in the Americas. So, on the pretext of collecting debts, French forces invaded Mexico in 1861,and installed a puppet Emperor, Austrian Archduke Ferdinand Maximilian. President Juarez fled the capital and established his HQ near the American border. Imperial forces were ordered to track him down and bring him in and, kill anyone who had given Juarez or his ragtag army succor or shelter.

Back in Washington, President Juarez’s Ambassador, Matías Romero, was able to convince President Lincoln, General Ulysses S. Grant and other leaders that America and the Republic of Mexico had a mutual interest in driving out the French. Maximilian’s Imperial government supported Jefferson Davis’s Confederacy as did every European monarch. Thus, the French occupation of Mexico was “inextricably tied to the US Civil War,” a war that consumed the time, energies, and treasure of the Union Army, leaving it unable to mount a realistic military campaign against the French. Nevertheless, President Lincoln decided not to officially recognize Maximilian’s government and thought it prudent to adopt a policy of neutrality. Realpolitik!

However, once the ink was dry on Lee’s surrender to Grant at Appomattox, Union soldiers, black and white, were encouraged to help “throw the French out of Mexico.” Five days later, April 14, 1865, John Wilkes Booth assassinated President Lincoln. The unthinkable had happened. The Union deeply mourned the rail-splitter from Illinois who warned that “The whole family of man has a stake in the outcome of the Civil War.” Illinois poet Vachel Lindsay wrote of “The quaint great figure that men love; the prairie-lawyer, master of us all.”

During the war, Ambassador Matías Romero, age 25, proved so agreeable, earnest, and persuasive that he was able to raise an 18 million dollar war chest from wealthy well-wishers, investors, bankers and US businessmen. Even Generals Grant and Sheridan were taken by the young man and promised aid in the form of repeating rifles and eventually rifled canon laid at convenient places along the border for pick-up by Republican forces. The war between the Imperialist and Republican forces intensified.

The rest of Guns, Grit, and Glory I leave to the enjoyment of my readers. Therein, they will discover how the American Legion of Honor was formed and the role its members played in driving out the French in 1867. Gun enthusiasts will learn of the key role played by new and improved American arms (thanks to Winchester, Springfield, Spencer, Henry) and how they surprised the Imperialist forces by their accuracy and range. Animal Rights activists will learn why camels, both Dromedary and Bactrian, were shipped into Mexico from Egypt and Tunisia.

The American contribution to victory is best illustrated by one of the vignettes Professor Hogan fashions so well. It describes the action taken by Colonel George Church of Massachusetts, assigned to protect President Juarez. Imperialist troops had all but encircled the President as he was attempting an escape on horseback. Colonel Church, seeing that capture was probable, gave his own swift steed to the President thereby enabling his escape while at the same time endangering his own life on the President’s slower mount. Hogan reckons that “Church undoubtedly saved the Mexican president’s life and changed the course of history.”

Hogan concludes his sprawling tale on a poignant note. His extensive investigation into matters of war and peace in Mexico pierced the veil and allowed him to see clearly that his heroes, Juarez and Romero, didn’t live up to post war expectations and, as often as not, had unclean hands. President Juarez’s virtual abandonment of his fellow indigenous people probably stung most, for he was after all, a Zapotec Indian. His financial dealings, foreign and domestic, were often cynical and, in his zeal to separate Church and State, he razed Catholic churches much like Stalin did Russian Orthodox churches sixty years later. Yet Hogan is right to acknowledge that Juarez was the “savior of his country.” Our hats are off to him and the Americans who helped save the Republic of Mexico. Unidos en Amistad!

Ed. Note: Guns, Grit and Glory will be available at La Nueva Posada after Dr. Hogan’s March 8th presentation at Open Circle, and at Diane Pearl’s.