The great thing about duplicate bridge is that it reduces the luck factor in the game. Every hand in match point games can be interesting and challenging as you are striving to score better than the other pairs holding the same cards. A low-level contract such as 1 no trump making 2 can be a great result for your side if all, or most, of the pairs sitting in your direction make a lower score. Similarly, if you defeat a contract while others are letting it make, you will also do very well in the comparisons

Notice I said duplicate “reduces” not “eliminates” luck. There is still a certain amount of good fortune needed to do well even at the duplicate version. Such was the case when the illustrated hand was played at The Lake Chapala Duplicate Bridge Club. South opened the bidding 1 spade, as did surely every other player in the room in that seat and North responded 2 hearts, which in their system was forcing to at least game.

South now showed her second suit, clubs, at the 3 level and North was faced with a quandary: to settle for the probable safe game of 3 no trump or to make an effort to explore at least a small slam? North was an aggressive player so he bid 4 clubs in the hope that this might spark his partner to climb to greater heights but to his disappointment all she could manage was 5 clubs.

Now North was faced with his second predicament on the same hand: should he pass and risk a poor result because everyone else is in the higher-scoring 3 no trump, or should he take the plunge and hope his partner could bring home the slam? To his mind there really wasn’t much choice, so with little delay he bid the small slam.

West took a few moments to ponder her opening lead and eventually hit upon a low trump. As North put the dummy down he could tell from his partner’s expression that she did not consider it a thing of beauty. Undaunted, however, she proceeded to play the following tricks: she captured East’s club queen with the king, ruffed a spade in dummy, played a heart to the king, ruffed another spade in dummy, cashed the heart ace, ruffed a heart in hand, ruffed another spade in dummy, then another heart in hand and cashed her final trump, the ace, as both opponents followed. Nine tricks were in and now all that remained was to hope that the player with the last trump also had been dealt three diamonds and so it transpired and 6 clubs duly came home for a clear top board.

And the decision to play in a small slam was justified by the confirmation following the game that had North-South stayed in 5 clubs and made 6, they would have had a very poor score as 3 no trump made 4 (or more!) at most other tables.

So on this hand good luck was certainly on declarer’s side! 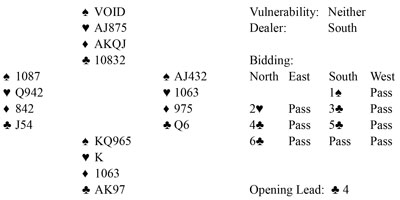