The Fifth Horseman Of The Apocalypse

The Pandemic, Donald Trump And The Latest Apostasy 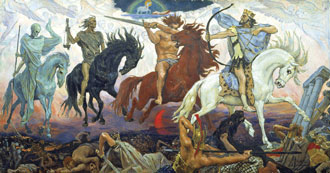 “And what rough beast, its hour come round at last, Slouches toward Bethlehem to be born.”
—William Butler Yeats, The Second Coming

In the Book of Revelation, the Four Horsemen of the Apocalypse represent famine, war, pestilence and death. The dread horsemen are said to usher in a time of global catastrophe. As this is being written, the world is in the grip of yet another visit by the pale horse, and his pale rider, this time in the form of the coronavirus, COVID-19. It is not the first and it will not be the last. Bill Gates has recently warned that humanity may be confronted by a new pandemic every twenty years. Given the reality that millions are packed together, too often under unhygienic conditions, in vast megapolises, and the ease with which newly mutated pathogens can be spread globally by means of modern-day air transportation, this prediction may be accurate.

Some nations have responded in a timely and responsible manner to the latest threat, while others, including the president of the United States, have initially reacted with ineptitude, denial, platitudes, evasion and buffoonery. Almost too late—certainly too late for many—we have begun to come to terms with the reality of our situation.

When most people hear the word pandemic, they think of bubonic plague, the Black Death of the Middle Ages. Perhaps, however, the first serious outbreak of bubonic plague was reported by the author of the Old Testament book of I Samuel. In 1141 BC, after the Israelites had suffered two humiliating defeats at the hands of their enemies, the sacred Ark of the Covenant was captured and held hostage by the Philistines. Subsequently, the enemy was stricken with an epidemic exhibiting all the symptoms of bubonic plague.

The Golden Age of ancient Greece followed the defeat of the mighty Persian Empire by the Athenians and their allies, led by Pericles. That period of peace and prosperity was not to last. Under siege by the enemy Spartans, the Athenians holed up behind their defensive walls. As is so often the case, a population confined to a small area becomes a sort of petri dish for the spread of disease. Soon, an epidemic of what may have been bubonic plague struck the Athenians, annihilating much of the population, including Pericles himself. By 404 BC, after 27 years of warfare, Athenian resistance ended in their defeat.

The Black Death, which struck Europe in the 1300s probably first appeared in the Crimean seaport of Caffa in 1344, when the city was besieged for two years by the Tartars. By some accounts, the plague arose when the Tartars cast the bodies of infected victims over the defensive walls. The Italian traders brought the plague with them back to Genoa, and from there it spread throughout the continent.

The most widely accepted theory is that the plague, transmitted by rat fleas infected with the bacteria yersinia pestis, originated in eastern Asia and was transported by caravans traveling the Silk Road to the Crimea. It took three forms, bubonic, septicemic, and pneumonic. Pneumonic was perhaps the most threatening because it could be spread by breath or sputum. The plague occurred in more than one wave, 1346-1361 and 1665-1666, being among the most devastating. Possibly up to sixty percent of the European population may have succumbed. Worldwide, the Black Death may have reduced the population by 350,000,000 to 450,000,000 souls, even reaching such outposts as the Viking colonies in Greenland.

Many concluded that the plague was God’s punishment for mankind’s sins, and tens of thousands joined companies of flagellants, wandering the roadways of Europe attempting to forestall divine wrath by flogging themselves. Others were convinced that the plague was caused by damp swamp air, a juxtaposition of three planets, the appearance of a large comet in 1340, subterranean gases released by an earthquake, even from having sex with older women. Our forebears can be forgiven for their lack of knowledge. Anton van Leeuwenhoek would not discover his “little beasties” in a drop of water under his microscope for several centuries, and it would take even longer for scientists like Joseph Lister and Edward Jenner to learn that the “little beasties” can cause illness but that preventative measures can be effective.

Perhaps there is a fifth horseman, consisting of fear, anger, ignorance, xenophobia, inflaming mobs of the angry, the fearful and the clueless. In the face of any calamity, there are always those who lash out at scapegoats. When the rumor spread that the plague was caused by Jews poisoning the wells, one of history’s worst pogroms was unleashed, leading to the persecution and slaughter of countless innocent persons. In one instance, the entire Jewish population of Freiburg was herded into a wooden structure and burned alive. That Jews, too, were dying of the plague somehow escaped the notice of the crazed rabble.

Modern society is not immune from such outrages. In September, 2001, four days after the terrorist attack on the World Trade Center, Frank Roque of Mesa, Arizona, shot and killed an innocent Sikh named Balbir Singh Sodhi because he “looked like a Muslim.” On April 1 of this year, inside a Sam’s Club in Midland, Texas, 19-year-old Jose Gomez III took it upon himself to defend the world from an innocent Asian family by stabbing three of its members, including two small children ages two and six. Gomez had convinced himself that they were spreading the coronavirus. The FBI reports that hate crimes against Asian-Americans are proliferating. Donald Trump’s references to COVID-19 as the “Chinese virus” has most likely stoked the resentments and fanned the flames of violence among the stubbornly ignorant.

“In the past, the causes of diseases were frequently not understood. It would not be until the twentieth century that the role of mosquitoes in the transmission of malaria and yellow fever would be recognized. Smallpox so decimated the Aztec and Inca populations that Cortez and Pizarro found it easy to topple once powerful empires. The Spaniards assumed that the pox was God’s judgment upon their hapless victims because of their non-Christian practices, not unlike some tub-thumping preachers who now assure us that the COVID-19 is God’s punishment for whatever offenses they can think of.

Covid-19 in all probability originated among the wet markets of Mainland China, those, at least, that specialize in wildlife. The World Wildlife Fund has condemned the trade in threatened and endangered species for years. It may be that the pangolin, a species of anteater and the most endangered animal on Earth, much desired as food and a source of quack medicine among some Chinese, is the source of the current malaise. We may never know for certain, but it is apparent that the wildlife trade is part of the tragic story. Perhaps God is angry with humans for the extermination of the pangolin.

Zoonotic diseases have been increasing since the 1940s, as habitat destruction and the exhaustion of natural resources continues. Sixty percent of all the infections that affect humanity are zoonotic, having made the leap from livestock or wildlife to humans, including smallpox, SARS, Ebola, HIV, and others. As new roads have been cut into the wilderness to facilitate loggers and miners in their program of ecological devastation, more persons come into contact with wildlife.

The crack-brained pronouncements of Mr. Trump are of no help. A short time ago, he suggested that we could either fend off or somehow treat a COVID-19 infection by somehow ingesting either disinfectants or ultraviolet light. Fiber optics anyone?

Recently, Mr. Trump stood before St. John’s Episcopal Cathedral holding a Bible upside down. Given his outspoken enthusiasm for the writings of the embittered atheist Ayn Rand, it may very well be that he was brandishing an anti-Christian symbol, much like the swastika, with which so many of his followers are enamored, that he was symbolically flipping the bird at all Christians, even those who continue to slavishly hang upon his every word.

Those who number themselves among the so-called Christian Right would be well advised to search their consciences, lest they fall prey to the latest apostasy, wherein Mr. Trump replaces Jesus Christ in their devotion. It is time to seriously reconsider the biblical admonition, “Put not thy faith in princes.”

No one knows when or how our current pandemic will end. Eventually, scientists will create a vaccine to prevent the infection and an effective treatment for those already suffering. However, life as we have knew it such a short time ago will never return to that blissful state. A new world dawns before us, and none can know what shape it will take.