The Confederate “Invasion” Of Mexico 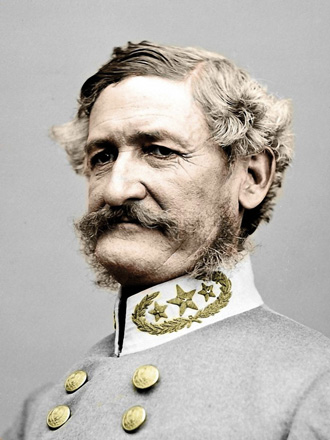 When the paralyzing news arrived in the late spring of 1865 that Robert E. Lee had surrendered the Army of Northern Virginia at Appomattox on April 9th,  it was quickly followed by Joseph E. Johnston’s surrender in North Carolina of the Army of the Tennessee on April 26th. The Confederate States president, Jefferson Davis was on the run. The Great Rebellion, the American Civil War, was about to finish its course. That is for all but the defiant few.

Major General Joseph Orville Shelby held a different view.  “JO” Shelby, lacking any military education or training, had found his métier in war, proving  to be a brilliant leader and tactician. He had risen to the command of the cavalry division of the Army of the Trans-Mississippi. A Kentuckian by birth, a Missourian by choice, the fiery warrior swore he would not surrender to the hated Yankee tyranny. Shelby gathered his men together and enjoined them to follow him to Mexico.  “We will join forces with Maximilian or Benito Juárez.”

The army of France’s Napoleon III had invaded and deposed Mexican President Benito Juárez, replacing him with an Austrian Hapsburg prince, Maximilian I, as emperor of Mexico.

About six hundred of Shelby’s men rallied to his banner. On May 26, 1865, the day the last remaining army of the Southern Confederacy officially laid down its arms in Shreveport, Louisiana, the remnants of Shelby’s Brigade marched westward toward Houston.                 As Shelby’s brigade advanced, its ranks swelled gathering additional veterans unwilling to surrender. The governors of Louisiana and Missouri and some respected rebel generals joined his march.

With the dissolution of the Confederate States of America, public order disintegrated in Texas.  In Houston and Austin, Shelby’s troops suppressed mobs raiding the state’s treasuries. He stood before his men and shouted, “We know what the world would say about us. We will not take the money.” His men cheered him.

By the time Shelby and his men arrived at the Rio Grande to cross into Mexico, US Secretary of State William Seward had begun to assert diplomatic pressure for the withdrawal of Maximilian and the French army from Mexico. The Grand Army of the Republic, a million men still under arms, stood an ominous threat to enforce the Monroe Doctrine. Already fifty-eight thousand soldiers under the command General Philip Sheridan were approaching the Texas-Mexico border.

The night he prepared to cross the Río Grande Shelby put the vote to his men: Join the Juáristas and fight the French or march on to Mexico City and offer their services to Maximilian. The glitter of the French Empire in Mexico against the alternative of fighting another futile war made their choice easy.

Near Monterrey in an ambush by the Juáristas, the brigade lost thirty-seven wounded and seventeen dead. The guerrillas made one further attempt at ambush. But Shelby, ever a prudent commander, had placed outposts that warned the camp of the approaching enemy and made short work of their attackers, killing sixty-nine including the guerrilla leaders.  Another eleven Confederates also died. Seventeen were wounded.

Although the occupying French troops were veterans of the Crimean War and North African campaigns, the best the Maximilian regime had been able to accomplish in Mexico was the occupation of strategic cities. The Juárista guerrillas ruled the countryside.

The brigade reached Monterrey, where they encountered a garrison French and Mexican Royalista troops.  Under flag of truce, Shelby sent the following message to the French colonel:  “Sir, I have the honor to report that I am within one mile of your command. Preferring exile to surrender, I have left my own country to seek service with His Imperial Majesty, the Emperor Maximilian.  Shall it be peace or war between us?  If the former, with your permission, I shall enter your lines at once, claiming at your hands the courtesy due one soldier from another. If the latter, I propose to attack you immediately.” Respectfully, Jos. O Shelby

Shelby and his Iron Brigade were welcomed. He and his officers were lavishly entertained. Later, approaching Matehuala, Shelby received word that a small garrison of French troops was besieged by about two thousand Juáristas. A surprise assault put the attackers to rout. Thus in the heart of Mexico ended the last battle fought by an intact Confederate military formation.

Following Matehuala, the Confederates marched to San Luis Potosí where Shelby was informed by the garrison commander that Marshal Bazaine, commander of all French forces in Mexico, had ordered that without further ado he must proceed directly to Mexico City.  The brigade arrived in Mexico City in early August, was well received and given quarters in a French army barrack. Arrangements were made for Shelby to meet with Emperor Maximilian and Marshal Bazaine.

The emperor and the marshal received the Confederates in a cordial, if informal audience. Shelby was accompanied by Major John Edwards. Edwards would become the principal source of the story of the Shelby expedition. In later years Edwards became a well-respected newspaper editor, founding the Kansas City Times after his return to the United States and later becoming editor of the St. Louis Dispatch.

Shelby made an impassioned plea for his dream of recruiting an army of forty thousand ex-Confederate soldiers to provide the nucleus of a standing army. There were probably many reasons that motivated Maximilian and Marshal Bazaine to reject Shelby’s grandiose proposal, but likely the fear of forty thousand seasoned ex-Confederate soldiers yearning to create a new Confederacy in Mexico entered into their considerations.

Nevertheless, the Americans were welcomed and Maximilian offered an opportunity to establish a colony in Mexico. To blunt the effect of turning loose a thousand penniless soldiers in their midst, Maximilian provided a grant of fifty dollars in gold to each of Shelby’s troopers when the brigade disbanded. Edwards described the fate of the Shelby’s troopers:

“. . . Few were willing to remain as colonists . . .  some received permission from Bazaine to march to the Pacific. On the long and dangerous road some died, some were killed and some took sail for California, for China, for Japan and for the Sandwich Islands.  A few, hearing wonderful stories of pirate treasure . . . got aboard a schooner at Mazatlan and sailed away in quest of gold.”

Shelby, joined by about fifty others, remained. They each received a land grant and together they founded Cordoba Colony sixty-five miles from Vera Cruz, naming the town they built, Carlota, after the empress. Located in a rich agricultural valley, at first the colony thrived. A reporter from the New York Herald visited in 1866 and wrote that to his surprise there were over five hundred families building new lives there. Shelby dedicated acreage to planting coffee, but his principal enterprise was a freight company under contract to the Imperial French Army to supply its outposts. Shelby brought his wife and two sons from Kentucky where they had waited out the war.

The colony was short lived. In 1867 the French Army began its withdrawal from Mexico. An army of Juáristas invaded the Cordoba Valley, destroying the Carlota settlement, burning farms and homes. Many of the colonists fled to British Honduras where another Confederate colony had sprung up, and some went even farther afield, to Brazil where the most successful ex-pat Confederate colony flourished. Many, like Shelby, returned to the United States where they gave their word never again to bear arms against the United States.