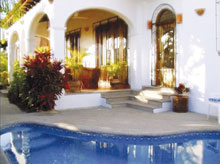 Houses in Mexico aren’t like houses further north in North America. Coming from the bleak north, the riot of colors, shapes and sizes are sheer eye-candy. Large walls or gates secrete some of the most beautiful gardens, fountains, topiary, and homes. The houses themselves feature miradors, patios, terrazas, and cupolas that make it easy to forget the bland four-walls homes further north.

The Mexican colors are delightful. I used to say our City Council had passed an ordinance requiring new housing to have taupe siding and be built in identical rows.

This is not true in Mexico. In my village, the colors are vibrant. The houses often have accent colors and ornate ironwork. But while I enjoy the wonderful homes here, the way some of them are laid out just doesn’t make sense.

The first house we rented had two kitchens, an infinitesimal kitchen inside the house, and a large spacious kitchen—outside! In order to reach the bathroom, we had to exit the house, walk around the corner, and access the bathroom from the patio.

In another house, the closets never quite met. The doors would close, but they all were crooked. When we moved in, it took us a few days to find the light switch for the overhead light in the master bedroom. It never really occurred to us that the switch was inside the closet!

And what is it with door locks and keys? One house had a different key for every door in the house. Our next house was the same. My high school janitor had fewer keys!

But Mexican bathrooms really are the limit. Our last house had two bathrooms that were so small we called them “bath-ettes.” Mine was just a bit larger than my husband’s. He had to walk into his bathroom straight to the sink, close the bathroom door so he could turn around to access the toilet and shower that were hiding behind the door. In mine, I had to keep the shower door open in order to use the toilet, and while short, my knees almost touched the opposite wall. In the home of a friend, her shower door opened to her sink.  When she brushed her teeth and bent over to spit and rinse -- her butt was inside her shower.  Claustrophobic could not even begin to describe some of the bathrooms I’ve seen. Of course, in some of the newer homes designed more for the “gringo’s” I have seen beautiful and ornate bathrooms, large and luxurious. I even saw Jacuzzis and bathtubs!

One of the bathrooms in our home is just off the master bedroom. I’ve never seen anything like it. The shower has a bench, which is wonderful for handicapped people. But the showerhead is placed for someone who is about 6’3”.  Most Mexican’s don’t seem to be quite that tall, so why is the showerhead so far up the wall? In addition, there is no shower door or curtain. This would be workable, I could even get used to it, but the bathroom itself has no door!  The entrance is a lovely archway cresting the top and a curved wall on the right side, but no door.  Who builds a bathroom without a door?

Finally there are laundry rooms.  In the northland, our laundry rooms were in the basement or if we were lucky, on the main floor -- but they were never outdoors. They weren’t even in the garage. The washer and dryer, like children and guests, had their own room.  They weren’t cast out to the patio, or a separate detached bodega. I just keep wondering whatever happened in Mexico that caused all those machines to be banned from the premises?