Forget the Facts, Print the Legend! 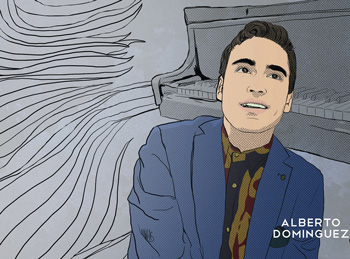 Back in the Old West, there was a shibboleth espoused by many frontier newspaper editors which went: If the facts get in the way of a legend, print the legend, anyway! So with that disclaimer, the story goes like this ...

Just after the beginning of World War II, the famed band leader Artie Shaw married the soon-to-be equally famous movie starlet, Lana Turner, and off they went to Mexico for an extended honeymoon. In Mexico City one night, they happened upon a little out-of-the-way bistro, where a somber-looking man in his early 30’s (whose name was Alberto Dominguez) was quietly playing a piano.

After a while, Shaw interrupted Lana Turner’s monologue about her movie career to ask her to listen to the music. Shaw’s finely-attuned ear had picked up an unmistakable signal: When the song was over, he laid out some money on the piano and asked the pianist to play the song again, and then again.

Who had written the song? Shaw asked. The pianist sheepishly raised his hand. Had he written anything else? Again: the same bashful response. And again, after hearing the second song, the same signal. By this time, Lana Turner had joined her husband at the piano and concurred that the two songs were among the loveliest she had ever heard. Then, in impeccable Spanish (Shaw was known to have had a genius IQ and was fluent in several languages), the band leader asked who owned the songs and had they ever been published?

Suddenly, the piano player turned wary and said that if Shaw has some business in mind, he would have to come back the next night and talk to the composer’s grandfather, who handled all of the family business.

The following night, Shaw made known his interest in buying a small percentage of the rights to both songs, and a short-term option giving him the right to see if he could get them published, or at the very least, publicized. The grandfather, after a consultation with the youngish composer, mentioned a figure. Shaking his head, the band leader said he would not pay such a sum. Rather cowed, the old man asked what amount he would pay, to which Shaw replied: “I’ll pay you fifty times what you just asked for, and that’s for each song.”

Needless to say, the legalities were readily dispensed with the very next day, and Shaw and Turner returned to Hollywood, where the band leader discovered that he was riding the crest of a wave. His brilliant arrangement and recording of Cole Porter’s Begin the Beguine was selling tens of millions of records.

Now, as the movie scripts indicate the passage of time, DISSOLVE TO:

On a hunch, Shaw eventually called a producer friend to tell him about the two songs he had found in Mexico. Could he come over to play them for him? The executive, Hal Wallis, was just finishing up a film and had indicated that he needed a romantic song for one of the movie’s flashback scenes.

Hearing both songs, Wallis thought one of them perfect for the film, and promptly bought the one-time film rights, had it orchestrated and put into one of the flashback scenes: a moment in which the two stars of the film are seen dancing in a Parisian nightclub just before the German army marched into the city. The movie was, of course, Casablanca and the song was Perfidia . . . and as they say, the rest is history.

The second song, Frenesi, was just as popular with audiences, and in time would be recorded by some of the most popular bands and singers all over the world, with the American version sung by Bing Crosby up near the top of the music charts for many months. Frenesi and Perfidia continue to this day to be among the most popular Latino melodies ever written and easily in the same class as Augustin Lara’s Solamente Una Vez— a song so immensely popular that it has been called Mexico’s second national anthem.

Now as to the veracity of this story: if it isn’t true, it should be!

P.S. And I feel the same way as to whether or not my mother’s family might have been related to that of the great Alberto Dominguez. Almost certainly not, however, as the composer’s family was from Chiapas, my mother’s from the state of Chihuahua.