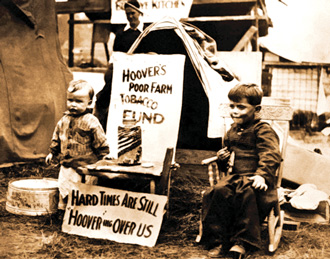 The crash of the American economy in 1929 brought on the worst economic depression in its entire history but also brought about some of the most sweeping national relief programs ever enacted. Today those programs are highly valued but back then many of them were considered the first stepping stones to Communism, national initiatives like Social Security, federal aid to Education, Medicine and the Arts, and on and on . . .

Later, the end of World War Two saw the passing of the GI Bill, geared up to help the millions of returning servicemen find their post-war footing as they returned to the country they had done nothing less than save. Later came the War on Poverty, FHA, Workers Compensation, the Public Parks Service, Temporary Aid to Needy Families, national scholarship funds and many other programs to aid the less fortunate among the American population.

Much later were the Federally Guaranteed Loans, one of which was for the building of a hundred million dollar golf course in New York City. Strangely enough, the federal government stood behind the loan but did not participate in any share of the profits. The recipient of such a “socialist” deal was none other than the current president of the United States.

But at its best, the American system is one of the finest ever devised, thanks in part to two of the framers of the U.S. Constitution: James Monroe and Alexander Hamilton. Monroe was of the opinion that the one true test of the greatness of any country is how humanely it treats the least fortunate of its citizens, while Hamilton championed the entrepreneurial spirit that is primarily responsible for the financial vitality of the country itself.

I’ll close on a personal note: Once long ago, seemingly in another lifetime and while still a relatively young man, I reached a dead-end professionally, but was able to stay alive (literally!) thanks to the Federal Food Stamp Program.

Luckily, within the next few months my luck did a 180-turn and I was soon able to set up a California corporation for the making of a motion picture whose production would eventually hire more than seventy people and keep many of them employed for more than six months.