About Canada and Canadians 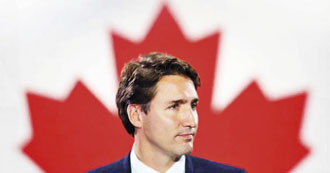 “When in the hell is that magazine gonna start printing the goddamned truth about the Canadians down here at Lakeside?!”

That was the opening line of a rather nauseating encounter I had with an obviously intoxicated man I met many years ago at a Lakeside party, soon after I had become associated with El Ojo del Lago.

“Exactly which truth do you have in mind?” I asked, easing upwind of his foul breath.

The question seemed to startle him, and with a confused look, he wandered away, as if in search of whatever it was he had in mind.

His fatuous question stayed with me, however, and with a start, I realized that (like many Americans at Lakeside) before coming here I knew very little about Canada and Canadians. So I headed for some history books, and being a WWII buff, one of the first things I read about was the WWII Canadian assault on the French beaches long before the invasion at Normandy. That raid at Dieppe by those courageous Canadian commandos was an unmitigated disaster, but the brutally-won lessons learned from that initial effort saved many thousands of lives in the subsequent D-Day invasion.

The more I read about Canada, the more I admired the country and its people, though in truth I already had a soft spot in my heart for Canada—for a personal reason. When my father’s ancestors had first migrated from Ireland in the late 1800’s, they arrived in New York at a time when the quotas for Ireland had been filled for the year; but rather than turn back, they decided to try to enter Canada, where, luckily, they were welcomed!

They settled in Manitoba, and were so successful at farming that five years later, when they finally entered the United States to settle in Kansas, they had enough money to successfully launch another farming enterprise. Later they would migrate south again, this time to Texas, then Mexico, where they did well at cattle-ranching.

All this recently came to mind when I came across several magazine articles, both in Spanish and English, about the young Prime Minister of Canada, Justin Trudeau. What follows are several things I found out about Trudeau, and some comparisons that immediately came to mind:

• Trudeau has an excellent relationship with the Canadian press, and has been quoted as saying: “When you’re (the press) at your best, it reminds and challenges us (the government) to be at our best. Thank you for your tireless work.”

• Despite the United States leaving the Paris Environmental Climate Accords, Trudeau is now working directly with American mayors and governors to cut emissions.

• Countering America’s cowardly coddling of Russia, Trudeau’s Foreign Minister is a Canadian of Ukrainian descent who is banned from entering Putin’s Russia.

• America has said that NATO is obsolete while Trudeau keeps Canadian forces installed in the Baltic countries to deter Russian aggression. For more than seventy years, NATO has preserved the freedom and national integrity of many, many countries.

• While some in the American government belittle minority groups, Trudeau chose as his Defense Minister a Hindu who was a former army major born and raised in India.

• While the American government is continually pushing Muslim bans, Trudeau once met Syrian refugees at a Canadian airport to hand out winter coats to them. He encourages refugees to come to Canada “. . . because Canadians are open-hearted, generous and dream big for their country.”

• Many in the government of the United States repeatedly scorn the LGBT community; Trudeau often marches in gay-pride parades.

• The American government delights in disparaging Mexico and its people, and has stalled NAFTA. Trudeau vowed to keep Canada in the treaty, and has told Mexico that “Together, your country and mine can still make it work.”

Footnote: This article was brought to the top of the publishing pile because of the American government’s recent despicable (and inexplicable) treatment of Canada at the G7 meeting, acting as if it were suddenly an adversary! Since the Second World War, Canada has been at America’s side in virtually every armed conflict, and has proven time and again to be the United States’ best friend and most reliable trading partner. Personally insulting its Prime Minister from the safety of being back up in Air Force One after the conference was the classless act of a coward.

*It should also be noted that Trump’s castigation of Canada for taking unfair trade advantage of the United States is totally disconnected from fact: The US has a trade surplus with Canada of over 100 billion dollars.