The Streets of Mexico 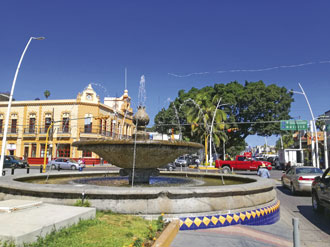 Everyone knows how much I love Mexico. After living in Mexico for a while now, I have to confess to having developed a few pet peeves.  Mostly about the streets in Mexico that are as bad as some of the driving I’ve seen.

First, let me explain something to the “gringos” who are new to Mexico, or they have been here, but haven’t figured this out.  16 de Septiembre, Niño’s Heroes, Ramon Corona, Hildago, Colon, Independencia are names of streets in almost every single village in Mexico.  I cannot begin to tell you how often people have given me directions and not told me the village they live in!  “The town square” doesn’t help either--because there is one in every town and village.

Today, I had a driver turn right from the left-hand lane in front of me, as I was also turning right, and the other driver nearly hit the pedestrians in the crosswalk.  Then he illegally passed the car in front of me on the right, and ran two red lights.  Since it is Friday, and he was driving so fast, I’m going to go out on a limb and guess that he was a tapatio confusing Lakeside with Guadalajara!

Lately, we have all experienced complaints due to road construction.  The first comment I heard:  “Why do they do this during High Season, don’t they realize how much more traffic High Season brings?”  I laugh, and bite my tongue, thinking, “Don’t THEY realize how impossible this road repair would be if it would be done during the rainy season?”

While construction is going on, one must be familiar with alternative routes, allow for more time, and just be patient.  Getting to my house is a real challenge, as two of the main streets are undergoing major repairs.  So I must go right two blocks to go left instead of straight. This avoids two different projects.

One of the longest streets in Chapala is Zaragoza.  It is undergoing some major work.  Of course, not being very fluent in Spanish and not being able to read the local papers, I don’t know how much of Zaragoza will be, or how long this project will take.  But I was very concerned about getting my smog check completed before the deadline.  Yet, the official location had the street torn up.  But, the center of the road seemed drivable. Braving everything, I drove the wrong way down the sand road, and was able to get my car into the service center.

The next day was a challenge to get to the Ultra Sound facility to have some tests done on my husband…also on Zaragoza.  We were able to park two blocks away and walk through the street.

In Ajijic, we had a problem getting to the lab for tests, because the street and sidewalk is torn up and there is a very deep hole filed with workers and big machines.  A vendor we know moved overnight because the construction was making it impossible for customers to get in.

But the point of all this “inconvenience” is that after the work is finished, things will be better, right?  The work going on isn’t patching a road, it is repairing infrastructure, i.e., sewer systems, pipes, and then putting in a better road.  Meanwhile, I get to see different neighborhoods and practice driving in reverse, or finding alternate routes in a moments notice.  I’ve found a few new shops, and a few new neighborhoods to admire.  So the “inconvenience” has led me into a wider understanding of these neighborhoods, and a few new stores!