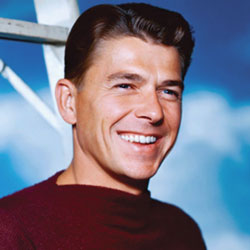 There are those who disagree with just about everything that was ever said by Ronald Reagan, the politician—and it has been fashionable for them to likewise rudely dismiss the late President Reagan’s long career in the entertainment industry. But with what follows, we’ll try to make a case for Reagan, the actor.

Item: While still in college in Iowa, Reagan used to broadcast the Chicago Cubs baseball games. No big deal, except Reagan never actually saw the games. Instead, working off a telegraph play by play of the game, he created the illusion that he was actually in attendance, watching the ballgame unfold—and did it so brilliantly that no one ever suspected the truth. Now granted that was not exactly like playing Hamlet, but a quick wit, compelling voice, engaging manner and a vivid imagination are usually some of the tools a fine actor uses to ply his trade.

Item: Only a few short years later, Reagan was signed by Warner Bros. Studio, and soon appeared in one of Bette Davis’ most famous films, Dark Victory. Playing the rather bland part of a charming young country-club loafer, Reagan brought to the role a sadder, darker dimension which registered with audiences, hinting as it did at some of his personal history in dealing with a failed, alcoholic father.

Item: Another triumph soon materialized when Reagan was cast as the legendary George Gipp in Knute Rockne—All-American. Gipp had been one of the greatest college football players of his era, time and again having taken Notre Dame to victory over heavily-favored opponents. Gipp was not, however, the standard sports hero. On the team’s long train rides out to play college teams on the West Coast, Gipp would spend all his time in the gambling car, playing and beating the card-sharks that always went along on such trips.

But Gipp is best remembered for the speech he made when he was only 25 and soon to die of a severe throat infection. Taking the hand of  Coach Rockne, whom he revered, Gipp said something that I’ll bet no college football player has ever forgotten: “Some time, Rock, when the team is up against it, and the breaks are beating the boys, ask them to go in there with all they’ve got and win just one for the Gipper. I’ll know about it and I’ll be happy.”

“Dying” on-screen is one of the hardest things for an actor to bring off, with most failing to truly touch our emotions because they’re  trying so hard that the scene ends in bathos rather than pathos. Reagan did it in pitch-perfect style—and Notre Dame players are still being shown the movie (some 90 years later!) in the hope that they can go out and “win one for the Gipper.”

Item: In 1944, Reagan starred, along with Robert Cummings and Ann Sheridan, in King’s Row. The movie was extremely daring for its time, dealing (though in various degrees) with incest, psychiatry, medical malpractice, class distinction, sadistic surgeons and insanity—and all this in a prim and proper small town in the Midwest around the end of the 19th century. Reagan plays a carefree playboy whose life-style is crushed when his family’s money is embezzled by the owner of the town’s main bank. Thereafter, he takes a night job with the railroad, moves in with Sheridan and her poor family, and becomes a working stiff—until one night when he slips and falls under a train.

Severely injured, he is attended by the town’s most prominent doctor, who has long hated him, and decides to (needlessly) amputate both his legs. Thereafter, the young man sinks into an unfathomable depression until later, in finally learning the truth from his boyhood friend, (Cummings, now a psychiatrist) actor Reagan does an amazing turnaround, going from deep grief to fully recovering his once-formidable fighting spirit—and all in one brief scene that might have taken another good actor several scenes to achieve the same effect.

Unfortunately, Reagan’s screen career did not end there, as he went on to a lackluster series of movie and TV roles that demanded little more of him than he simply show up on the date of the filming, silly films like Bedtime for Bonzo (in which he co-starred with a chimpanzee) and the terminally dull movies he made with his wife-to-be, Nancy Davis.

Today, most people only remember the last stages of his acting career and judge him accordingly. But here, we have a cultural divide: Anglos place a very high premium on consistency; Hispanics believe in judging a man by his best moments, and believe that once he has done something exceptional, he always has it in him to do it again.

We leave it to our readers to judge which method is the more equitable.