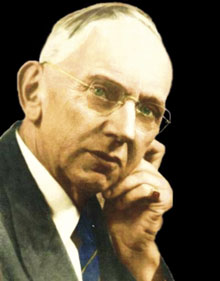 In 1910, the New York Times called Edgar Cayce “America’s Most Mysterious Man”; after his death in 1945, JAMA, the highly-esteemed Journal of the American Medical Association, called Cayce “the father of holistic medicine.” What happened in between those years is one of the most fascinating stories of the 20th century.

Edgar Cayce was born in a small town in Kentucky in 1877 to a poor though devoutly Christian family. As a quiet but highly inquisitive child, he could memorize pages out of a book merely by sleeping with it under his pillow. Later, he would further astound his family by being able to imagine events that had taken place months before and many miles away. He could also proscribe home-spun (and usually successful) cures for neighbors whose ailments had befuddled the local doctors.

As he grew into his teens, his reputation for effecting “miracle cures” likewise developed, eventually spreading to towns throughout Kentucky and beyond. His method was always the same: under the loving eye of his grandmother, who would quietly take notes, young Cayce would enter a sleep-like state, say the subject’s name, and then slowly begin to “see” the actual cause and hence the best cure for the ailment. In doing this, his mind would go back in time, trying to find the root cause of the ailment. Coming out of his trance, he would remember very little of what he had said, but his grandmother had transcribed it all. Without exception, these “readings” were of benefit to his “subjects.”

A few years later, however, a reading would take Cayce into a new dimension. The subject was a renowned urologist from New Orleans who, along with his wife, was visiting relatives in Kentucky. Considering his medical specialty, the man had an ironic ailment: at age forty, he could not control his bladder, and often awoke in a very wet bed. Distraught, the doctor had sought treatment with specialists all over Europe; none had found a physical cause for the problem.

Encouraged by his wife, who had heard stories about the remarkable cures the teen-aged Cayce had brought about, the doctor grudgingly agreed to see the boy. What transpired would be a life-changing moment for the doctor, but especially for Cayce himself.

With the doctor and his wife in a darkened room inside the Cayce’s humble home, Edgar went into his sleep-like state, and as was his habit, began to go back in time, searching for trauma in the doctor’s past that might suggest the cause of the current problem. Tracking back a decade at a time, the reading finally ended at infancy; then, as Cayce later related, with a flash of light, the past went into a previous lifetime—and then even further back.

The year was 1692, the place Salem, Massachusetts, during one of the most hideous moments in American history: the time of the Salem Witch Trials. Many were burned at the stake for being “witches,” but for lesser alleged crimes, some were repeatedly dunked in large vats of vinegar, which always made the “miscreants” violently ill. Now . . . imagine that the good doctor from New Orleans, in a previous lifetime, had been one those doing the dunking—and that for years afterward he had been psychologically crippled by guilt.

Now presume this guilt was manifesting itself in one of his far more recent incarnations, and that the remorse was manifesting itself by causing his present humiliating condition. Then, believe that when Cayce came out of his trance, and his grandmother read out her notes to the doctor and his wife, the man, in tears and stunned to his core, quietly asked if there was anything he could do to atone for that ancient sin. Smiling, young Edgar said that a way would be shown to the doctor.

Returning to New Orleans, the doctor decided to set aside a full day for the free treatment of people who ordinarily could never have afforded his professional services. The experience exhilarated him, and within a short time, the bed-wetting ceased, never to occur again.

Of course, those knowledgeable about psychiatric techniques know that what Cayce was doing resembled what Sigmund Freud would introduce to the world during the latter part of the 19th century. But where Freud made deductions based primarily on what his patients told him, Cayce needed no such assistance; further, Freud could venture no further than one lifetime, whereas Cayce’s “passport” allowed him to travel much farther back in time. Moreover, while neither Freud nor any of his disciples could foresee the future, Cayce repeatedly did so—with amazing accuracy.

Now, all this sounds rather preposterous, right—and probably just a coincidence. But before Cayce’s life ended at age 68, he had conducted some 17,000 readings, about 14,000 of which are on record at the Association of Research and Enlightenment (A.R.E.) in Virginia Beach, Virginia. Today, the A.R.E. draws millions of visitors from all over the world to its beautiful facility. The organization also has a huge presence on the web.

Edgar Cayce is one of the most “documented” psychics in all of recorded history, having inspired several documentary films and dozens of books, the most famous, There is a River  by Thomas Sugrue.  Cayce’s readings covered thousands of topics, and he himself wrote many books, one of the most popular his book about Jesus Christ, as well as a book called Beyond Death:  Visions of the Other Side.

For those who are still skeptical, they should reflect on a few words by the greatest writer who ever lived: “What’s past is prologue.” (The Tempest) and “There are some things in Heaven and Earth, Horatio, that are not dreamt of in your philosophy.” (Hamlet)