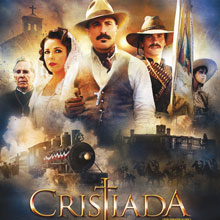 A movie dramatizing the Cristero Rebellion opened recently in Mexico. The film, mainly shot in Mexico, features several well-known Hispanic actors such as Andy Garcia, Santiago Cabrera and Eva Longoria and deals with one of the dramatic moments in Mexican history, would be expected to do very well down here—but apparently such was not the case.

Historical background: from 1926 to 1929, the Mexican government under President Plutarco Calles put into effect a series of anti-clerical laws aimed at decimating the power of the Catholic Church. Such measures included deporting priests and bishops. Such measures had been percolating since the time of Benito Juarez in the mid-1800’s. Juarez, one of Mexico’s most revered figures, was elected president five times, his last term ending in 1872. He had turned back the French occupation of Mexico, and thereafter instituted liberal democratic policies that were not nearly as indulgent with the Church as had been the case under the Emperor Maximillian.

Some argue that Juarez’s democratic and religious reforms would not have reached anywhere near the levels implemented by the Calles government some half century later—but just how far did his regime actually go?

The movie is too long and too short; short because it leaves much of this complicated history unexplained, too long because at 2 1/2 hours, it seems interminable. The script is far too simplistic, working in black or white mode, when the material would have been far better handled in the less absolute color of gray. The first-time director (known basically for his superb work in special visual effects) does wonderfully in the action and battle scenes, but fares far less well in bringing the characters to life, or even making them believable.

Andy Garcia, a charismatic and talented actor (see Godfather III, which Garcia stole right out from under Al Pacino’s nose) here seems little more than just another Latino-looking actor. As for all the female characters in the story, some played by stunning-looking actresses, not one makes much of an impression. Peter O’Toole fares even worse, seeming to have wandered in from another movie. Type-wise he’s all wrong, and then is given nothing but pious homilies to mutter. Reuben Blades, playing President Calles, is one of the very few acting stand-outs.

The film treats a very complicated situation in a very simplistic way. One doubts the wide-spread viciousness of the Calles regime, even while amused by the sanctimoniousness of the Cristeros. The movie is pitched at an over-the-top level that works against itself, much as did Mel Gibson’s near-hysterical handling of The Passion of the Christ.

The action scenes, however, are beautifully done, and the locations   well chosen, giving the movie great visual scope; but sadly, it’s like a huge and expensive frame of a painting that is much too small for it. The production overpowers the story.

Further, the script is so one-sided that the Cristeros come out looking like reincarnations of some of the Apostles and the other side might as well have been the Gestapo. There is very little complexity or contradiction in the story.

Watching it reminded me of another movie set in Mexico: Juarez, with Paul Muni, Bette Davis and Brian Aherne. Shot in 1939 over several months in and around Vera Cruz, for years the film was the second most expensive movie ever made, trailing only Gone With the Wind—but talk about complexity: it was Monarchy vs. Democracy, king vs. president—and both were honorable men! It’s a great picture—and one highly recommended for those who would like to learn Mexican history in a most pleasurable way.