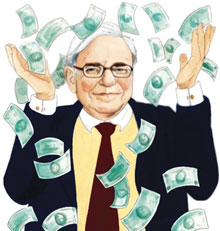 He’s the world’s third richest man, yet for the last several years he’s been playing the “common man” roles made famous in the old Frank Capra movies like Mister Smith Goes to Washington and It’s a Wonderful Life. In the process, he’s become that rarity of rarities, a multi-billionaire radical, who actually believes that:

The super rich should pay their fair share of taxes, even though they regard him as traitor to his class, much as FDR was considered back the 1930s.

It’s good for America for him to give away 99% of his 45 Billion dollar fortune.

The US is lousy with bailout billionaires, who have created a culture of selfishness and greed.

The US can rise to any challenge but not if its citizens believe that the US is ruled by a plutocracy.

The US has to get serious about shared sacrifice.

The US must completely overhaul its health system, and calls the current system a “tapeworm that cuts corporate competiveness far more than taxes do.”

The market system rewards him lavishly, but that doesn’t mean that he’s more deserving of a good life than a teacher, social worker or an American soldier fighting in Afghanistan.

It’s basically unfair that he paid in 2010 only 17% on an income of almost 40 million dollars, earlier having donated almost 20 million to charities, or a lesser rate than that of his office staff.

When the average citizen is no longer able to climb up the economic ladder, it’s very bad for the economy—and an ominous sign for the rich.

People like himself who have made major “withdrawals” from society should have to pay a lot for it.

The assumption that lower taxes for the Super Rich will create more jobs is “mystifying because we had the lowest taxes for this group for almost a full decade and about the worst job creation ever.” (See  George W. Bush)

So how did billionaire Warren Buffett (called by some “the Oracle of Omaha”) develop all these “radical” (termed, by some, Communist) ideas? His father, Howard, was a four-term Republican Congressman with a rock-ribbed sense of integrity, who once turned down a raise because his constituents had voted him in at a lower salary. Young Warren never forgot that.

Nor did he forget that many years later, he heard Dr. Martin Luther King, Jr. say something that stuck forever in his mind: “It may be true that the law cannot change the heart,” said King. “But it can restrain the heartless.”

Yet Buffett still believes in the capitalist system and the American people, and does not think that despite the enormous disparity (the largest by far in all of American history) between the 1% and the 99%, chaotic upheaval is inevitable.

Others are not so sure. Today, many of America’s Super Rich are as detested as was the French Aristocracy in the late 1700s—and perhaps they should keep in mind Spanish philosopher George Santayana’s ominous words that “those who cannot remember the past are condemned to repeat it.”