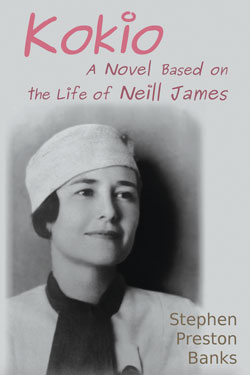 The arrival of Neill James in Ajijic in 1943, after suffering two near-fatal accidents, one while descending from the summit of Popocatepetl and the other on the “newlyborn” Volcán de Paricutin (2800 m), in Michoacán, is well-known.

In Kokio, Stephen Preston Banks, however, asks from where did this dynamic woman and world traveller hail? What did she do between graduating College in 1918 and her world travels, related in her five books, published between 1937 and 1946? And why did this world traveller suddenly decide to stay put for the remaining 50 years of her life in a remote Mexican fishing village? Why?

In this biographical novel, the main narrator, Damon Byrd James– a distant relative of Miss James – spins a yarn of possible answers to these questions. Besides Damon Byrd James, Banks also creates narrators for the other chapters of the novel, be they travel companions, lovers or bosses.

Damon Byrd James traces Neill James’ roots back to Grenada County in north-central Mississippi and remembers his mother telling him that he “had an ancestor who was a famous author.” The James clan called her Nell or Nellie, “who was orphaned as a young girl, never married or even cared much for men… faded into obscurity and died in Mexico.”

At age twenty-three, after graduating college as a stenographer, Nell “Neill” James landed positions with the U.S. Department of War, the Department of State and the Bureau of Investigation (BOI/DOJ) in Washington, D.C., and later in Washington State. The author supports his claim with “classified documents” and memoranda in the central chapter of the book, suggesting that she served as a US operative to gather “negative intelligence.”

Banks’ novel is “based on the life of Neill James”; it is a biographical novel. As he says: “My coverage of events that happened on the world stage during Neill’s life is not intended to be history.” This genre gives an account of the life of actual people, contemporary or historical, and their experiences, but also allows for filling the gaps in a person’s life with plausible possibilities. A classic example is W. Somerset Maugham’s novel about Paul Gauguin, The Moon and Sixpence (1919).

The author of Kokio suggests that Neill James’ travels around the world served to cover a second, secret career, namely that of intelligence gathering for the US government, with “Kokio,” a species of hibiscus native to Hawaii, as her cover name.

Miss James herself at times dissembled her own identity with wedding announcements for a marriage of which no record has ever been found; by using different versions of her name and different birthdates in her passports; by claiming to have been visited at her Ajijic home by famous people, who had died years before.

It is up to the reader of Kokio to determine the plausibility of the suggested events and behavior in which Miss James, at times, emerges as rather cold and calculating. When Kittie Holcombe, a friend and the woman who got Neill the government jobs, tried to stay in touch with Neill after she moved to New York, “Neill never answered [her] letters or returned [her] calls…”

In Hawaii Neill entered into a romantic relationship with Geraldine Sartain, journalist and narrator of the chapter. Geraldine describes Neill as “an ardent lover, over-heated and always available, but… not warm in her heart.” When Neill received an offer of “an important position” in Tokyo, Geraldine describes her demeanor as “almost emotionless. She… just looked at me, as if she were reporting the weather.”

After Neill’s Tokyo assignment, they met again in Berlin, via China and India, Neill travelling on a fake passport, with a “wrong” birth date and as a “swallow,” a slang word for agents who use seduction to extract information.” Thus, says Geraldine, “Neill roared back into my life with the force of a hurricane”.

The author cautions us with the words of Johann Wolfgang von Goethe, that “We are never deceived; we deceive ourselves.” So, if the reader can get past the benevolent image we have of Neill James as benefactor and Lady Bountiful, Kokio may make an “intriguing” read.

Stephen Preston Banks spent ten years researching the life of Neill James and travelled twice to Ajijic, where he heard stories, both favorable and “unsavory” from those who knew Miss James, “none clearly reliable.” Banks also concludes that the last years of Miss James were not spent in comfort and security. In spite of considerable capital holdings, renting and selling houses, she suffered financial losses in the devaluation of the peso in the mid-1980s. And besides, her mental health seemed to be failing, as witnessed by a “word salad” letter to her sister Jane.

Neill’s sister Jane eventually negotiated an arrangement with the “Jalisco International Society” (LCS), which turned the Ajijic property over to the society in exchange of a “lifetime in-home tenancy” for Neill, and Jane consolidated Neill’s remaining money in a trust fund for her sister’s care and maintenance until her death.

On the morning of October 8, 1994, her housemaid found that Neill had passed away, “smiling as if she were at last having a pleasant dream.” And on October 17, the Society held a memorial service in which her ashes were buried beneath the tree in the back patio. “Nobody from the family attended.”

Neill James, is known to the expatriate community of Ajijic for the splendid garden by the shores of Lake Chapala, in which we meet, rest and partake in a wide variety of cultural, social, and educational activities. Miss James was and still is loved by the locals of the village because she gave them a public library, started classes in art for children, thereby launching the careers of professional artists, imported looms and silkworms to set up a cottage industry of silk weaving, and revived the traditional craft of embroidery.

During this period of her life, Miss James reveals a side of herself that is less than angelic. She presses aggressively ahead in her career, even at the expense of a couple of her best and intimate girl friends, and with a rare letter to her sister Jane assures her part of her father’s inheritance.

In the early 1990s, Neill received various honours for her contribution to the community, such as International Patroness of Ajijic, Godmother of Mexican Artists and the Lifetime Achievement Award by the magazine El Ojo del Lago.

To us expatriates here in Ajijic, Miss James was a passionate and accomplished woman who left us the beauty of a splendid garden to savor with all senses everyday, and to the people of the village a generous woman who left them the legacy of a host of accomplished artists, whose works we admire every day in their murals and colorful galleries around town. We experience Neill James as a real person who is with us everyday.

Dr. Banks, researching her for ten years… continuously came up with information showing that Neill James “had lied about or exaggerated or hidden her own story.” Here’s how he writes about that in an Author’s Note following the novel’s end:

Yet Neill James was a bold, passionate and accomplished woman, and she lived an exceptionally long and adventure-filled life. Most of the broader events depicted in this book I believe are true, though I have embellished them with details, fictional characters, and subplots to tell a story. I followed Neill’s exact itinerary, from birth to her final rest.