Torquemada And The Spanish Inquisition 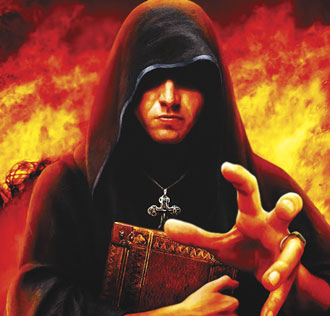 On the morning of February 6, 1481, six prominent citizens of the Spanish city of Sevilla, Jewish converts to Christianity, were marched through town barefoot, each carrying an unlighted candle. After attending Mass and a sermon, they were burned at the stake. A few days later, seven more victims were similarly cremated. Thus began one of the darkest episodes of modern western European history, the Spanish Inquisition, which was to last until 1834. Early on, a massive stone platform named the Quemadero was constructed at Sevilla to accommodate all the burnings.

Pope Innocent IV paved the way for the Inquisition in 1252 with his papal bull Ad Extirpanda, sanctioning the use of torture on heretics, by this action, in effect renouncing the teachings of the Jesus Christ he professed to follow.

In the popular imagination, Ferdinand and Isabella are kindly monarchs who launched Christopher Columbus off on his world-altering voyage to seek a shortcut to India, causing him to accidentally discover the Americas. In reality, the reign of this royal couple was far more sinister.

It was Queen Isabella who was convinced by the Dominican priest Tomas de Torquemada, the future Grand Inquisitor, and two other prominent churchmen that an inquisition was needed to root out Conversos and Moristos, those Jews and Muslims who had betrayed Christianity by means of false conversions, thus corrupting the souls of others. Torquemada was to become one of history’s most accomplished sadists, rivaling Joseph Mengele and Lavrenti Beria, frequently taking a careful, personal interest in the torture and interrogation of his victims.

Victims of the Inquisition were generally rousted from their beds late at night and hustled off blindfolded to a darkened chamber in an unknown location, there to be interrogated by hooded figures using the most barbaric torture instruments ever devised. The suspect was never informed of the crimes he was being accused of, never confronted by his accusers, never accorded access to meaningful counsel, and was considered guilty until proven innocent.

The Edict of Expulsion in 1492 gave Jewish and Muslim citizens until July 31 to convert to Christianity or trudge off into exile, forfeiting their worldly goods in the process.  To avoid forced conversions, many Muslims and Jews did flee the country. Others found sanctuary on the estates of nobles until the monarchy threatened landowners with severe penalties for harboring them.

Because they were suspected of secretly celebrating Muslim and Jewish rites, many were regarded as false Christians or crypto-Jews, who had only converted in order to gain positions or status. Those unfortunate souls became the focus of the Inquisition. In 1465, Castillian aristocrats, resentful of Conversos who had advanced socially and economically, demanded an inquisition to put an end to so-called Judaizing in their region. Jealousy and rivalry helped to fuel the Inquisition. As the Inquisition progressed, even children were encouraged to inform on their parents.

Confessions secured by torture are unreliable. If subjected to sufficient pain, anyone can be made to confess to anything and to accuse others who may be innocent. The torture devices designed for the inquisitors were ingenious and effective. The water torture, wherein a suspect’s nostrils were held shut while eight quarts of water were poured into him through a funnel, has unfortunately not gone out of style. Often, a cloth was forced down the victim’s throat with water being poured into it. The cloth was swallowed all the way to the stomach, causing suffocation.

The pit and the pendulum made infamous by Edgar Allen Poe’s short story of the same name existed in reality and had frequent use. Many have heard of the iron maiden, wherein a suspect was enclosed in an armor-like suit of steel with sharp spikes facing inward, leading to a slow, agonizing death. The hanging cage, in which a victim was tightly enclosed by iron bars and left suspended outdoors to die of starvation, dehydration and exposure to the elements, appears early in the film Robin Hood, Prince of Thieves.

Other devices were equally heinous: The rack, the wheel, the garotte, the heretic’s fork, the head crusher. The so-called “pear” was inserted into the mouth or vagina and expanded until flesh was lacerated. There were variations on the commonly used strappado, but typically a victim’s hands were tied behind him and a rope was used to suspend him from the ceiling by the wrists, dislocating the shoulder joints. Sometimes weights were added to increase the victim’s torment.

It was rare for a suspect to be acquitted because there were major financial incentives to find him guilty. A convicted heretic’s worldly goods went into the coffers of the Inquisition itself. Ferdinand and Isabella shared in the profits, as did the accusers, those who turned in wealthier associates, troublesome neighbors or family members.

Once convicted, victims were subjected to the dread auto-da-fe, an act of public penance during which their sentences were meted out to them. The ultimate punishment involved 45 to 90 minutes at the stake. In rare cases when a suspect was acquitted, he was forced to swear an oath never to reveal anything about his experience. If the oath was violated, he was subjected to 200 lashes.

Jews who did not convert but who remained in Spain were primary targets. Groundless accusations, rumors, innuendo and superstition inflamed the gullible citizenry, causing Jewish homes and businesses to be looted and burned, their owners massacred. Jews were accused of murdering Christian children and drinking their blood. Jews were even accused of causing the Black Death that swept Europe in the 14th century by poisoning the wells. The Inquisition set the stage for the pogroms of Czarist Russia and the Holocaust of World War II.

There is some disagreement as to the number of persons executed during the Inquisition, but some historians have speculated that there may have been over 2000. The techniques of Torquemada and the inquisitors were not forgotten by subsequent generations. Others were eager to apply them. In October, 1578, the theologian Michael Servetus was burned alive by Calvinist persecutors because of his non-trinitarian views. John Calvin even urged the use of green firewood so as to prolong his suffering.

Elizabeth I, who may deserve the sobriquet “bloody” nearly as much as her unfortunate half-sister Mary, zealously persecuted Catholic priests and monks after her ascension to the throne. Dutch Protestants were known to heap torment upon Catholic priests, some who found themselves serving as living bumpers on fishing boats. The 2014 burning alive of a captive Jordanian pilot by ISIS, while mobs of spectators cheered and hooted, serves as a warning that religious fanaticism is still with us.

The water torture of the inquisitors differs little from the waterboarding of prisoners by US authorities in the aftermath of 911, even though such as former Vice-President Dick Cheney continue to argue that it does not constitute torture.

Late in life, Torquemada retired to a monastery to devote the remainder of his days to prayer. There is no evidence that he ever repented of his sadistic acts. In one of history’s strangest acts of retribution, his bones were disinterred and ritually burned by his detractors in 1832, only two years before the Inquisition was abolished.