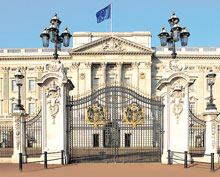 As I sifted through the usual junk mail and utility bills one envelope caught my eye. It’s not every day you see the Queen of England’s coat of arms on your mail.  If it was an advertising gimmick they had my attention.

Weeks earlier, on a whim, I had dashed off a note to the Queen never dreaming it would be delivered much less that a response would follow. I was sure it would end up in the round file like most letters to Santa do, but as I gingerly opened it I could see it was the real McCoy.

In place of a stamp it said  “postage paid by Great Britain, Sandringham, London, England”. On the inner flap of the envelope was one word—conservation—which told me the palace had gone green. How nice. I was immediately struck by the personal tone of the letter as it referred directly to things I had said in my letter. This was no form letter sent to the masses.

As a child growing up in Canada we spoke of the royal family in hushed tones and here I was holding a “post” from Her Majesty. Mind you, not for a moment did I entertain the thought that the Queen had personally written the letter so I wasn’t surprised to see it was signed by a lady-in-waiting. Having a vivid  imagination, I immediately decided she surely must be a distance relative of Anne Boleyn’s or at least Jane Seymour.

For the rest of the day I read and reread my treasure until I could quote it word for word which I proceeded to do to anyone who came within ten feet of me. To others this is akin to having to watch vacation movies—boring!  I have even mulled over the idea of enclosing a copy with this year’s Christmas cards. Mail from royalty tends to make some people silly and giddy I have found.

Having resided in the U.S. for most of my adult life I am proud of my adopted country but as I began to hum “God Save The Queen” under my breath I knew I was still a Canadian girl at heart. I suddenly had the urge for tea and crumpets, could Yorkshire pudding be far behind?

E-mails are the way to go these days but nothing can compare to holding a greeting in your hand from a “friend.” The letter is now tucked away for safe keeping for my future generations to enjoy.  “Her Majesty takes great pleasure in receiving letters like yours,” it said.  Believe me Liz, the pleasure was all mine.   Apparently dreams really do come true Virginia.