THE STUFF OF DREAMS

A Novel by Alejandro Grattan-Dominguez
Weeb Publishers  241 pages  $15.95 US
Reviewed by Jim Tuck
(Review first published in The Guadalajara Reporter) 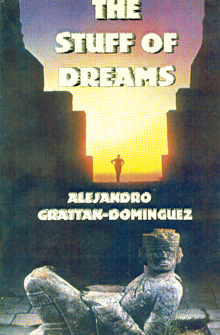 One never ceases to be amazed by the versatility of novelist/film director/screenwriter/magazine editor/cultural commentator Alejandro Grattan. This quality is even more remarkable since a main current running through several of his early novels/films is the interaction of three cultures: Anglo, Mexican?American and Mexican. Yet one never gets the impression of a writer in a rut. He may be consistent in his choice of theme but is dazzlingly multi?faceted in both narrative and philosophical emphasis.

The Stuff of Dreams is a story of two Irish?Mexican brothers involved in an intrigue involving Mexico’s archeological treasures. On first reading you get the feeling that you’re back in the noir world of Raymond Chandler and James M. Cain. As you read of a prostitute “whose body was on a short?term lease,” you could be in the pages of Double Indemnity or Mildred Pierce.

Yet it would be unjust to confine Grattan to the corral of such literary mustangs as Cain and Chandler. Enormously talented though they were, these adepts of the Southern California School of Hard?boiled Fiction lacked an ideological and moral dimension to their spare, tough-guy prose. That attribute is shared by Grattan and a 20th century French writer who mingled realism and idealism with the virtuosity of Brillat?Savarin preparing his latest culinary gem.

I refer to Albert Camus. While some may consider it a stretch to envision a link between hard?boiled realists such as Chandler and Cain and an author whose wartime writings caused him to be hailed as “the conscience of the French Resistance,” it was Camus himself who acknowledged his debt to the bards of the 1930s?style roman noir.

Camus always pitted his ethical vision against philosophical absurdism, which he equated with moral indifference. In discussing his best?known work, The Stranger, Camus made no secret of how he had been influenced by Cain’s The Postman Always Rings Twice and Chandler’s Farewell My Lovely. In The Stranger, Camus’ unforgettable creation is an alienated man officially sentenced to death for killing an Arab but actually because the jury is repelled by the man’s failure to weep at his mother’s funeral.

But back to Grattan?Dominguez. Few people are harder cases than “Frank” and “Danny,” the Irish?Mexican O’Malley brothers. (Grattan’s keen insights are possibly shaped because he shares their ethnic background.) Frank, a once?successful film director, is a classic victim of the “you’re?only?as?good?as?your?last?film” syndrome. When a Hollywood deal goes sour, he teams up with Danny, from whom he has long been estranged. If Frank is a has?been, Danny is an embittered “never?waser” desperately anxious to free himself from this unenviable status.

While I won’t invade the author’s space by revealing too much of the fascinating plot, you’ll encounter characters that won’t easily come unstuck from your consciousness: a redneck Borgia named “Wade Wilson,” “Professor Mondragon,” a Moriarty?ish figure every bit as sinister as Conan Doyle’s creation, “Topolobompo,” a scheming pseudo?cop with the appearance of a crow and the instincts of a vulture and “Calvin Carter,” a booze?and?drug ridden idiot savant who often comes up with an ingenious solution to the most difficult problems.

The novel’s crowning point comes when Grattan doffs his Cain?Chandler hat and dons the chapeau de Camus. The brothers, after developing a deep affection for the people, as well as a great respect for the cultural heritage of the country they came to pillage, make the costliest sacrifice of their entire lives—a decision which in a whimsical twist of fate, leads to the realization of their fondest dreams. With this adroit maneuver, the author transcends the slagheap world of Cain and Chandler and brings his oeuvre into line with Camus’ guiding principle of combining riveting action with strict adherence to moral principles.

(The novel has recently gone into another printing and can be ordered by e-mailing This email address is being protected from spambots. You need JavaScript enabled to view it. or by calling 765-3634.)