By Sydney Gay
This email address is being protected from spambots. You need JavaScript enabled to view it. 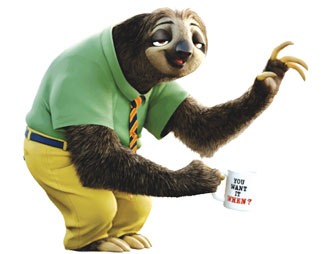 Anthropomorphism is attributing human traits, emotions, or intentions to non-human entities, objects and animals, an inborn tendency of human psychology. The psychologist I went to said humans are misguided to assume animals have similar emotional, social and mental capacities. Anthropomorphics believe Earth is a planet where animals and humans regularly share common needs and feelings.

Once I went to a circus where the lion tamer explained he didn’t get torn to pieces because he understood animal psychology. “Cats,” he said, “are content if they know what to expect, social rank is important because of  this, I as trainer and in the strong alpha male position, which enables me to control their behavior, furthermore once trust is established, communication between man and animal becomes affection, loyalty and great companionship.

Curious to know if animals in a zoo feel content, I began looking into zoo life. The best time to visit is sun rise or sun set when animal personalities bloom, emotions and expressions become more visible. Could it be possible, a zoo is not a prison, that wildlife is more content because of regular feeding and living without enemies? Compare that to freedom in the wild, a fearfully unpredictable life fraught with predators, parasites and disease? I don’t have to be a genius to ask that question.

Looking at the many sides to anthropomorphic behavior, twenty years ago I came upon the work of Christopher Bird, The Secret Life Of Plants, proving plants can communicate with humans who pay attention and listen. I hadn’t considered this before and decided to test Bird’s theory. In my yard was an asparagus plant overgrown to the bursting point, I tried to move it from the pot, I tugged and tugged, but no matter how I tugged, the asparagus wouldn’t budge. Logic said use a hammer, break the pot.

Professor Bird said instead of doing that, talk to the plant; explain what you need. So I said, “Hello plant, how are you? I see you have outgrown this container, wouldn’t you like to move to a better location? I will give you twenty four hours to loosen up your roots so that you can slip out and I would very much appreciate if you didn’t break my clay pot.”

Honestly I did not expect this to work, I am not a professional gardener, my main interest is teaching safe sex to teenagers, anyway this plant was huge, the pot so big, one strong man could not move it. The next day my gardener took a hammer from his truck, “Wait, don’t hit it, let me try something.” I gave the asparagus another tug, it slid out with not an ounce of resistance. I knew I was on to something exciting. A few years later I began to study the work of Masaru Emoto, an anthropomorphic water scientist.

“Water,” he says “has the ability to record and react to human thoughts. He photographed droplets of water responding not only to music but to the various moods of human behavior. I thought how fascinating, thoughts have a vibrating energy which water can record. Emoto teaches even a small glass of drinking water reflects what humans think, say and do, so before drinking become more conscious, thank your water for cleansing the guts and helping to heal injured parts of your body, do this every time you drink, you will feel a definite different quality of life.’  Silly and anthropomorphic as that may seem I began talking to the water.

Years ago in Tokyo Japan, before the invention of Alexis, I experienced reverse anthropomorphism in an appliance store through an adorable five foot robot shaped like a Shmoo. This Shmoo had flirtatious eyelashes and perceived body expressions, when I moved to the left Shmoo asked questions, if I moved to the right Shmoo made suggestions, we talked together ten enjoyable minutes like normal people do, when I turned to leave, she said “Goodbye, I hope you have a beautiful day.”