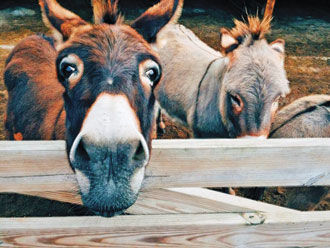 Back in the days when I was gainfully employed at a high-tech company in Canada, I sat in my office late one evening, working on a problem that I apparently felt I could resolve by staring at the ceiling and hoping for some form of Divine Inspiration. The problem that had provoked this unlikely bout of diligence was that the technical team on which I was a lowly member had hit a road block. We had arrived at a fork in the road forward where we were looking at two prospective technologies, each of which was very attractive but were, unfortunately, completely incompatible with each other.

We lacked the manpower to address both and had to choose one. We had been chewing on this problem for a while, to no good end. In fact, one, of our non-technical colleagues had taken to calling us the “Princes of Procrastination” which, regrettably, had the ring of truth to it.

We had reduced paralysis by analysis to a near art form. Hence, we were no closer to reaching a decision than we had been several weeks ago. So I concluded that my own best course of action was to head for home, sink my teeth into a large glass of a decent Scotch, and go to bed.

My route to the employee entrance/exit ran along a corridor off which most of the technical staff had their offices. As I made my way along it, I noticed that a light was still on in an office and that one of the scientists was still “beavering” away at this late hour. This office belonged to a researcher who was on a six-month assignment to our company from a famous laboratory in a small, middle-eastern country. He was a world-renowned expert in his field, a brilliant scientist, softly spoken and usually very reluctant to express an opinion on any topic outside his specific area of technical expertise. He was not a part of our team but was peripherally aware of the problems we were having in choosing between our two options.

“Good night, Joseph,” I said as I walked past his door. “Seamus,” he called out, “do you have a moment? I have a story I would like to tell you.” Now I was, and still am, a sucker for a good story and so I pulled up a chair and sat down beside his desk. “In my country,” he began, “there was a small donkey who worked on a farm near my home. The donkey’s work, as a beast of burden, was to haul heavy loads of stones, wood and water to wherever they were needed on the farm that day. At night, the donkey was permitted to sleep on a small bed of straw next to the farm’s main barn.”

At this point I must have started to fidget, probably influenced by the receding prospect of my glass of Scotch. “Seamus,” he reproached me, “please be patient. This is not a very long story.” Suitably chastened, I sat back in my chair and Joseph continued. “At the close of one day, a careless farm worker failed to latch the door to the barn and the donkey got up from his bed and wandered inside. There he saw two magnificent piles of hay, one on either side of the barn’s central aisle. Wow, thought the donkey, this is more food than I usually get in a week. He trotted up to stand between the two gorgeous piles. His head moved from left to right, right to left and back again as he pondered which of the two piles was best, and which he would eat first.”

“The next morning the lazy worker realized his mistake and locked the barn door properly, with the donkey inside, still pondering as to which of the hay piles he should start with. No choice seemed obvious. After three days the donkey felt faint. After four, he lay down on one side and one week later the donkey died of hunger.”

“So that is my story for you, Seamus,” Joseph concluded. “I hope you enjoyed it.”

“Thank you Joseph,” I said slowly. “Thank you very much.”

The next morning we had scheduled a routine technical meeting and I told the team the story of the starving donkey. After a mercifully brief recap of our two alternative projects, we agreed that we would make our selection via a show of hands and one narrowly triumphed. Now, united, we moved forward with all hands on deck, sails fully rigged, and all guns blazing – to spoil some otherwise perfectly good nautical metaphors.

One year later our new product was launched with much hype and a lot of high fives between the technical team and the sales force. We congratulated ourselves on all being such fine fellows, clever enough to foresee the impact of this cutting-edge technology and with the skill and dedication needed to bring it to market in this wonderful new product. To this day I have no real idea if the product was as good as we imagined it to be or even if we had made the better of the two technical choices. But that didn’t matter. It was our baby and we loved it. Our alternative project was long forgotten.

In the almost twenty years of retirement that have followed, I have often struggled to find ways to incorporate into my daily life the philosophy that any decision is better than none, but I do have one idea that I plan to try it out first chance I get.

On every long distance flight, there comes the moment where the flight attendant begins to push the food cart down the aisle, while chanting the universal mantra of every international airline: “Chicken or steak; chicken or steak.” I will have made up my mind long before the cart arrives at me. This will be of benefit to both of us. The flight attendant will be able get on with dispensing the food more quickly and I, at the very least, will have avoided the fate of my mentor, the starving donkey.

Ed. Note: Seamus O’Hagan is retired from the high-tech industry and a longtime resident of Ajijic.