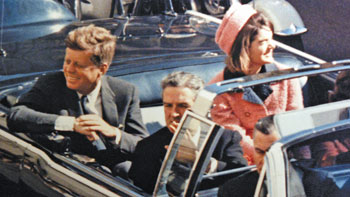 Many years ago, the History Channel produced a six-part series on the above-mentioned matter, but was blocked by the Federal Communications Commission from broadcasting the series, threatening to take away the Channel’s federal license if it violated this mandate. Only fairly recently was the ban finally lifted, and one’s first reaction is to wonder why the FCC ever lifted the ban: the series is political dynamite, if simultaneously highly controversial!

Containing many never-before seen interviews with a staggering variety of people, both prominent and ordinary, the series slowly but surely attempts to tear to shreds the findings of the Warren Commission’s Report which once had been the “final word” on the 1963 assassination of one of America’s most popular presidents.

That “final word” averred that JFK was killed by a single gunman, Lee Harvey Oswald, the motive for the murder unclear. There the matter stood until 1991 when the Oliver Stone movie JFK was released, causing a political uproar. Much of Stone’s movie was bitterly rebuked, and though it did draw some baseless conclusions, history has been kind to the film in that many of the main points it made have been largely re-stated by the History Channel’s ultra-comprehensive six-hour series.

For those old enough to have lived through the national trauma of the assassination of JFK, many of the initial “official explanations” rang hollow, e.g. Oswald did not seem to have anywhere near sufficient motive for committing such a horrendous crime; the trajectory of the fatal shot did not conform with the theory that the shot came from far above and behind the motorcade, and in the subsequent crime which involved the killing of Oswald himself, the motive given by the assassin, Jack Ruby, that he had killed Oswald to spare JFK’s widow the ordeal of having to testify at any subsequent murder trial involving Oswald was an assertion that was little less than laughable. Far from laughable, however, are the following conclusions the History Channel’s investigation reached:

People say that “elections matter” and they do— but so do presidents. Surely most of the entire world came to miss the brilliance of America’s 37th president. Of far more serious consequence, however, is the many hundreds of thousands of people who died in the Vietnam War who might still be alive today if President Kennedy had not been murdered in Dallas in late 1963. The war would go on for another 12 years.

Footnote: Though the History Channel, in the face of severe political pressure, had to recant some of its assertions, of the wide net of conspirators mentioned by name in the TV series, not a single defamation lawsuit related to this matter has ever been filed against the History Channel by any party or individual who might have had some stake in the matter. We urge our readers to draw their own conclusions.