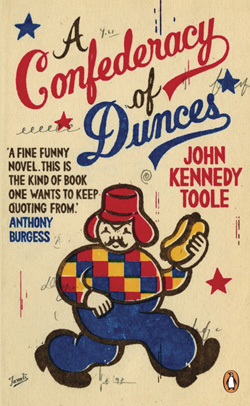 Life is unfair. Did you ever hear about the author who could not get his book published and after he committed suicide that book became a Pulitzer Prize winner for Literature? It should be a lesson for us to never give up.

Public television in the U.S.A. (PBS) did a program this year called, THE GREAT AMERICAN READ. They polled Americans on their favorite fiction novels. They had a panel select 100 of them to be voted on by the viewers to ultimately find American’s best loved novel. Spoiler alert: it is TO KILL A MOCKINGBIRD.

When I turned the TV on one evening a panel member was discussing his favorite book, A CONFEDERACY OF DUNCES by John Kennedy Toole. It reminded me of Saul Bellow’s, Pulitzer-nominated, HENDERSON, THE RAIN KING. The disgruntled Jewish doctor who raises pigs to spite convention and takes off on a bizarre adventure to the unexplored depths of Africa.

Intrigued, I was astounded to learn that A CONFEDERACY OF DUNCES was rejected by all publishers but one who was interested if many revisions were made. They were never able to agree on those revisions so it was not good enough for them to print. After Toole’s suicide his mother never quit trying to sell the book. She finally succeeded and found an author who agreed to get the book published and it won the Pulitzer Prize the next year in 1981.

But wait, that is just the start of strangeness. The real irony here is found in the book itself. The story and the main character, “Ignatious,” who is a little crazy, (understatement, think John Belushi or Jackie Gleason for the movie role) disrespects society, the world and the universe. He ridicules life as it is. But did the universe have its revenge, rejecting the author, Toole, until after his “sudden” demise?

Was it the ultimate payback? Do not mock the unseen powers.