The Tears Of Horses 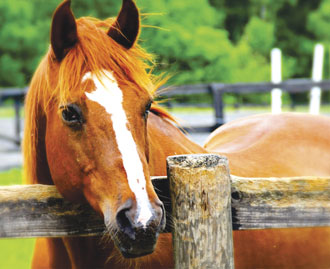 “An animal’s eyes have the power to speak a great message.”

The class of young student nurses stood in shock and horror as they witnessed the scene of carnage in the local slaughter house. Pigs, squealing in desperation, were herded into a tiny, crowded pen where a steel chain was clamped around the hind leg of each one. Then, one by one, they were hoisted into the air. Their throats were cut, spilling gushers of blood down upon the others, each shrieking in terror as they awaited their turn. Pigs are intelligent creatures, to which any farmer can attest. These hapless creatures knew what was about to happen to them.

My sister, the novelist Linda Steele, was one of the members of that class on that dark day so long ago. Ever since, she has avoided all food containing pork and has attempted a largely vegetarian diet.

The general public gives little consideration to where their beef and pork comes from or how it is processed. Cattle and hogs are fair game, as are sheep and goats among some ethnic groups. Few of us give chickens and turkeys a second thought. However, at least in most of the western world, horses are regarded as friendly creatures, pets, and assumed to be off limits as sources of human and pet food.

Sadly, the reality is otherwise. A recent report from the Animal Welfare Institute reveals that horses all too often suffer fates as horrific as did those pigs on that faraway day. Horse slaughter has been outlawed in the US since 2007, following a federal court decision affirming a Texas law outlawing the practice. However, the cruelty continues in other lands, and American horses are all too often exported to Canada and Mexico where outrageously cruel fates await them. Unscrupulous livestock purchasers assure sellers that their pets will be adopted into safe, humane homes and refuges but proceed to export them to overseas abattoirs. Other horses are stolen by rustlers, a practice not limited to the romantic days of yesteryear in the Old West.

Companies engaged in the horse slaughter business continue to export tens of thousands of animals to Mexico and Canada each year and continue to vigorously oppose legislative efforts to prohibit the practice. State laws governing the exportation of horses are insufficient. Too often, animals are transported by greedy traffickers to states with weaker laws. This is not a states rights issue. The slaughter of any animal for human consumption has long been federally regulated, ever since the heyday of muckraking investigative journalists like Upton Sinclair.

Scenes of unspeakable suffering and horror that routinely take place in horse slaughter facilities have been reported by investigators from the Animal Welfare Institute and other organizations. There are reports of nightmarish scenes in which are horses whipped in their faces by cruel employees and flipped onto their backs, causing severe pain and injury. Horses have been observed with broken bones piercing their hides and with eyeballs dangling by a thread. Horses are often shackled and hoisted alive by a hind leg to have their throats cut.

One cannot help but consider the spiritual and emotional condition of those employees who routinely mete out such horrors, much as one considers the beings who daily shoved children into Holocaust gas chambers. Do their souls become so inured to the suffering of helpless creatures as to vanish altogether, leaving behind only a merciless husk, an automaton without conscience that exhibits only the physical resemblance of man.

In 2015, the European Union banned the importation of horse meat originating in Mexico after widespread animal cruelty and food safety issues surfaced. It was learned that 87% of the horses involved originally came from the United States.

Legislation has been introduced into the US House of Representatives to prohibit the export of horses to overseas slaughter houses, H.R. 961, the Safeguard American Food Exports Act, sponsored by Rep. Jan Schakowsky, a California Democrat, and Rep. Vern Buchanan, a Virginia Republican. The act, which is enthusiastically endorsed by the veterinary profession and equestrian organizations, would prohibit the export of US horses to other countries to be slaughtered. As of this writing, it is slowly winding its way through the legislative process.

This is not a matter of simply sorting out and eliminating old, weak or ill horses. Before the practice was banned in the US, the Department of Agriculture deemed 92.3% of the horses fated for slaughter to be in good health. Horses who are sick, old or unwanted should only be euthanized by licensed veterinarians under humane conditions, as would any other pet.

In survey after survey, the American people have condemned the slaughter of horses and voiced approval of legislation to end the practice. Now is the time for the U.S. Congress to rise to the occasion and pass the Save American Food Exports Act. Our equine friends are counting on us.