The Same Deep Water As Me 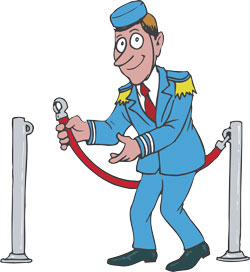 This play is about a fake claim pursued under the “no win no fee” personal injury legislation in the UK. Prior to 1999, an injured claimant was obliged to pay his/her solicitor for legal services, regardless of the result of the claim. It has been alleged that the change in the law has encouraged ambulance chasers and has caused an increase in frivolous claims. Nick Payne has created a sort of dark comedy around this legal background. Regretfully, the play is not well-written nor is it entertaining.

A hard-working cast do their best with the shallow dialogue, and there are some good moments in the courtroom scene in Act 2, but on the whole I was disappointed by the play. The first Act opens in the office of Scorpion Claims, a small-town legal outfit. Russell Mack plays “Barry Paterson,” the owner of the firm, portraying him as a genial and basically lazy lawyer. He spends most of his time ordering in donuts and planning his next vacation.

His associate “Andrew Eagleman” is aggressively played by Mark Donaldson, who is frequently on the telephone. It’s a boring scene, and nothing much happens until “Kevin Needleman” shows up. Kevin has seen the personal injury TV ads, and concocts a plot to stage a fake car accident with a food truck. He reckons that the Whole Foods people will pay his supposed damages rather than suffer the legal expense of taking him to court. John Ward is very good as the odious and foul-mouthed Kevin, and his presence livens up the scene.

The courtroom scene is potentially more dramatic. Rob Stupple plays “Judge Jessup” as a parody of an old and easy-going judge who has no understanding of the real world. The only thing that rouses his interest is Kevin’s habitual foul language. Patricia Guy does a good job as a sharp lawyer, but the author doesn’t give her any incisive lines. Emily Crocker acts well as Kevin’s wife “Jennifer” who has a hard time lying on the witness stand.

In the final scene she becomes a love interest with Andrew – but this scene is disconnected from the rest of the play. It’s as if the author decided to throw in some romance to liven up the ending. Kelly Mills also makes her debut at LLT in an emotional outburst as the truck-driver, but the judge doesn’t seem to be paying attention. Other parts were well handled by Jill Flyer, Todd Pifer, Judy Long, Gloria Bryen and David Dennis.

Neal Checkoway always has a clever and unusual set, and here he has a back projection window which illustrates Andrew’s thoughts. It’s an ingenious idea, though it was distracting at times. But he couldn’t do much about the lackluster dialogue and cardboard characters. Unfortunately, this was not a good choice of play. I should also mention Karen Lee as Sound/ Video Operator. Evidently there were hundreds of sound cues and it all went smoothly. Shellie Checkoway was Producer, Debra Bowers Stage Manager and Bruce Stanley was her Assistant.

Next up is the musical Sweet Charity which opens on March 22. This is Barbara Clippinger’s last show as Director, and it should be a lot of fun.