Houston, The Eagles And Hotel California 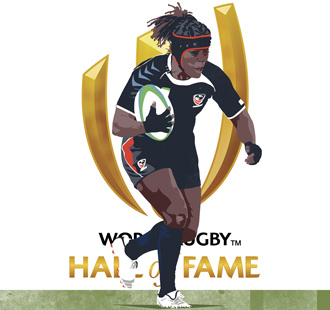 I was invited to Houston to present an old friend into the USA Rugby Hall of Fame at a banquet at the downtown Hilton Americas hotel. The date had been arranged to coincide with a rugby match between the USA and Scotland on the following day. The USA national rugby team is called the Eagles.

I was coming down in the elevator on Friday when a well dressed middle aged lady asked me in a broad Texas accent if I was here for the Eagles. I told her yes I was and asked her if she was also a rugby fan. Texans in my experience are very friendly and invariably polite but I could see that my question had confused her.

She struggled for a moment and then replied, “Do you mean that football type game?” I responded “Yes the USA Eagles are playing Scotland here tomorrow.”

“Well that’s a coincidence” she said, “because the Eagles band is playing at the convention center as well. I may have looked confused so she helped me and said, “You know, Hotel California, those Eagles.”

We both laughed at the coincidence and the elevator doors opened and we went our separate ways. Hotel California was very well known to me as I used to race on a sailboat named Hotel California and we often had the song blaring out at full blast.

A further coincidence was that I had just read an article in my internet Daily Telegraph where people in the U.K. were now comparing the Brexit machinations with the famous song, particularly appropriate was the line, “You can check out any time you like, but you can never leave.”

This in turn reminded me of another line in the song that had been subject to some discussion a few years ago. The lyrics sung were “So I called up the captain, please bring me my wine, he said, ‘we haven’t had that spirit here since 1969’. When a music critic pointed out to Don Henley that wine was not a spirit he made this famous response:

“Thanks for the tutorial and, no, you’re not the first to bring this to my attention – and you’re not the first to completely misinterpret the lyric and miss the metaphor. Believe me I’ve consumed enough alcoholic beverages in my time to know how they are made and what the proper nomenclature is. But that line in the song has little or nothing to do with alcoholic beverages. It’s a sociopolitical statement. My only regret would be having to explain it in detail to you, which would defeat the purposes of using literary devices in songwriting and lower the discussion to some silly and irrelevant argument about chemical processes.”

Rather a good putdown I thought. The metaphor in question was, I believe, alluding to the fact that the freewheeling “spirit” of the sixties ended in 1969.

I had another interesting elevator experience on Sunday morning. A couple entered and the man bid me a cheery, “good morning and how are you doing today?”

I responded in kind and noticed he was barefoot. He saw me looking at his feet and told me he had lost his shoes but not to worry as they lived only 45 minutes away. I asked if they had been at the Eagles concert and they happily told me yes it had been great. The elevator arrived and we parted. But I thought this is another sign of the world we live in today. Not only do you have to pay big bucks for the tickets but if you intend to partake in adult beverages you cannot take any chances on driving home so you have to part with another $250 to stay at the Hilton Americas overnight.

Oh, and my USA Rugby Eagles beat Scotland, 30 to 29, to register their first ever win over a Tier One rugby nation. So a good time was had by all.