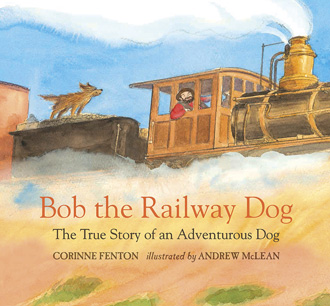 Bob, at nine months old, left his home, and his career as a locomotive hitchhiker began: he would acquire an insatiable thirst for train travel and throughout his lifetime he would travel thousands of miles in South Australia.

He would get to know every station, station master and every line, and though he had no master, every engine driver was his friend. His temperament was gentle, his pedigree was elusive: he had shaggy long hair, grey and unkempt. He was originally found by a William Ferry, a train guard, who picked him out of a truck load of waifs and strays found wandering around the environs of Adelaide. Bob’s facial expression had just something that appealed to the kindly heart of the animal loving guard- he possessed him.

In time Bob had found his world- and his days were spent travelling on many different trains, with train engine drivers, he was in his element, sitting on his black throne- the cab top. The big whistle and belching black smoke seemed to have an irresistible attraction to him—he lived on the fat of the land, not being particular from whom he accepted his dinner.

Railway workers loved him, train drivers gave him pride of place, on top of the engine cab, and they willingly shared the contents of their tucker bags. Bob would be very well-known, and indeed adored by so many during his lifetime and was seen frequently in Victoria, Brisbane, and Sydney. Even though he had no master, he always knew where to find William Ferry, his founder: at night he would follow his engine man of the day, never losing sight of him, spend the night with him, and return with him the following morning to the Railway.

In 1889 William Ferry was promoted to Stationmaster, but by now Bob had graduated from jumping trains alone—he was the independent King of the Outcasts. His fame would spread throughout Australia, and even as far as England; artists painted his portrait, writers wrote about him, poets sang his praises. He died in 1895: his portrait hangs on the wall of the Adelaide Art Gallery; his statue in the museum.

In 1924, The Register noted that Bob had earned such a reputation that a brass plate was made for his collar; on it was engraved, “Stop me not, but let me jog, For I am Bob, the railway Dog.”

Anyone Train Dog - April 2011
Anyone Can Train Their Dog By Art Hess   Obesity is the leading nutritional disease across America and affects far too many of our pets. If your