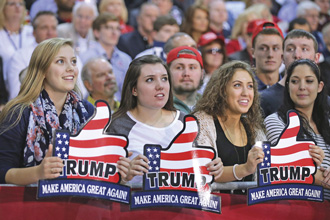 Hi. My name is Wally. I’m a recovering Trump voter and I’m here tonight to tell my story. This is part of my recovery and I thank Trump Voters Anonymous for being here. This group is a place where a grown man can cry and will find understanding.

I don’t know why I hated Hillary Clinton so much. A lot of my friends did, too, and I guess I just fell in with them. And besides, Donald Trump said he was for the working guy and would bring back the jobs that went overseas and he would create jobs, jobs, and more jobs in America – good paying jobs.

My pay has not kept up with inflation, but Trump gave the billionaires big money. What happened is continuing wage stagnation that falls behind the cost of living. We sacrifice so the Koch brothers can have an annual tax savings of $1.5 billion. They can donate $100 million and more to Republican candidates and still be $900 million ahead. And then the Republicans will give them more tax cuts in appreciation.

What do you say when you realize somebody made a fool of you, that they really took you for a ride? Instead of bringing back jobs, Trump is sending more jobs out of America, often to places with a horrible human rights record. His own daughter Ivanka’s line of women’s shoes will now be made in Ethiopia, a country in Africa that has one of the worst human rights records in the world. But hey, if labor is cheap in China, it’s even cheaper in Ethiopia, so Ivanka can make a really nice profit from the human misery at the shoe factory.

I’ve been mad for a long time, because it seems like you vote for somebody and then they get to Washington and forget all about you. You don’t exist anymore. Trump promised he would not forget us, and he would put Wall Street in their place. He said Wall Street owns Hillary.

Trump said, “I know Wall Street. I’m not going to let Wall Street get away with murder. Wall Street has caused tremendous problems for us.” But then he packed his administration with Wall Street executives who are billionaires.But I believed Trump so now I’ve gota bad case of “buyer’s remorse.”

My mistake may cost Medicaid $800 billion dollars. That’s money that will be taken from the old, sick, and dying, and become a gift for Trump’s extremely rich friends. My mother is in a nursing home supported by Medicaid. If they kick her out, what am I going to do? My daughter has juvenile diabetes, a serious, expensive – and hell yes, a pre-existing condition. If Trump repeals Obamacare, is my daughter just supposed to die?

I’m worried about the old people who live across the street from me. They’re nice people on a limited income. He served his country in the Korean War. But the Trump budget wants to eliminate the “Meals on Wheels” program that they really need.

Yeah, Trump fooled me, all right, and I’m mad as hell. But hey, I’m just as mad at myself for believing all his lies – and that’s what they were – just a bunch of lies.

I can’t afford to travel much, but I did take the kids to Yellowstone one time. They loved it, and I don’t like the idea that Trump wants to turn our parks over to big companies so they can exploit them for a big profit. He wants to end the moratorium on mining for coal on public lands and give away the coal at way below market value. This cheats America out of owed royalties. Trump also wants gas and oil drilling on our public lands and parks.

I’m an underpaid worker and Trump’s Labor Secretary is against labor and is all out for the big corporations. He’s opposed even to a minimum wage. Trump turned his back on the workers he promised to help – and we believed him.

Trump’s director of the EPA has a sick fetish for big pollution. He loves pollution and calls it progress. He wants to get rid of the very agency he now heads. This is no good. It’s bad enough my daughter has juvenile diabetes and might be cut from health coverage because of her pre-existing condition. She should not have to breathe dirty air, too.

I thank God for this program of recovery. Tonight I worked on Step Eight: “Made a list of all persons we had harmed, and became willing to make amends to them all.” I mentioned my mother, my daughter and the old people across the street. I don’t have money. All I can do is say, “I’m sorry. I truly apologize for voting for Trump. It was the biggest mistake of my adult life.”

Thank you for hearing my story and helping with my recovery.

Hearts at Work - October 2009
Hearts at Work —A Column by Jim Tipton “The shortest distance between two people is a smile” —Anonymous   In Farewell My Lovely, Raymond 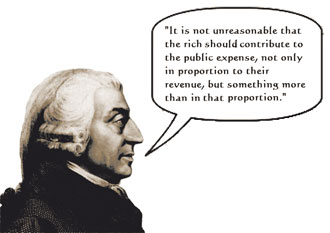 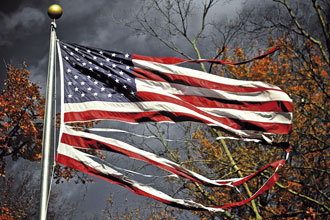