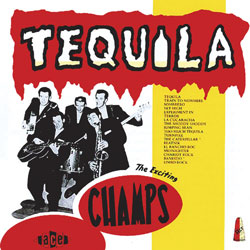 In the winter of 1957 a group of young studio musicians, at the urging of Challenge Records in L.A., wrote and recorded a song “Train to Nowhere.” The company owner was in dire need of a hit, but the guys, Danny Flores, Dave Dupree, Cliff Hills, Buddy Bruce and Gene Alden had no song for side B.

Some of the guys had jammed a few times with a young Mexican kid from Jalisco, who was new in town, and was introducing them to Latin sounds which were becoming the rage in American music. He had a wailing, jazzy sax and a catchy, soulful tune and they asked him to help them out. His name was Rogelio Raygoza, a gifted musician, who needed a break and was stuck playing one-nighters in L.A. Trying to stay one step ahead of immigration, he was performing under the name of Chad Rios.

The group was mildly impressed with his tune; it was okay but it needed a little work. They all sat around the studio tweaking the arrangement, jamming and drinking. A few hours later the group began recording, drunk on Tequila. After all, this was only for side B, not a lot of effort was put into a song that no one was going to hear anyway. In only 3 takes it was a cut. The song needed a name and “Tequila” seemed to fit the occasion with Flores injecting the word into the song. They also chose a name for their group, The Champs, after the studio owner, Gene Autry’s, horse.

Rogelio was paid $35.00, the usual daily rate for a studio musician, and went back to Mexico. This was real good money back then for a “wet-back” and he was glad to get it. No one knew that Rock and Roll history was made that day.

The record was released on January 15, 1958. Air play was given to side A until a Cleveland DJ decided to flip the record and give his listeners something different. The calls started pouring in and other radio stations followed suit. “Tequila” shot to number 1 on the Billboard chart and won a Grammy in 1959 for best rhythm and blues song. This song was making “Big Bucks.”

This sound was different, not the usual Rock and Roll material. A Latin flavor with a Cha-Cha beat appealed to teenage dancers. Listen carefully and you will hear the subtle, haunting sophistication of the melody. It begins with an acoustic guitar accompanied with hand claps. Every four bars another instrument is added, bass, drums then electric guitar. The middle of the song features the sax entering with a riff then cutting loose with a jazz-inspired solo. The end of the song is the reverse of the beginning with instruments dropping out until only the acoustic guitar and clapping remain.

Things were pretty loose back in the early days of Rock and Roll. This new music was considered a “flash in the pan”, here today, gone tomorrow. Few songs were copyrighted, recordings were made in garages, songs were written on the spot and musicians recorded under several different names to avoid violating what few written contracts there were. It’s at this point that recollections begin getting a little fuzzy.

On the early label Chad Rios is listed as the composer. Due to the high volume of sales, more records were pressed and these later labels show Dave Burgess (aka Dave Dupree) as the composer. No mention is made of the illegal Mexican who snuck across the border to ply his tunes. If you listen to both songs, Train to Nowhere, an undisputed composition of Burgess, then “Tequila”, you will notice an unmistakable difference in style. The first lacks the soul and complexity of the latter. Conflicting stories abound over the details of that day, but Rogelio always insisted he was the composer.

Da Dah Da Da Dah Da Da Daaa…. There isn’t a baby boomer in the world who doesn’t react to those 8 notes. It seems that they are genetically imprinted into Homo Sapiens from Australia to Alaska and all points in between. Those 8 notes are a primal command for all present to jump up and dance. We all know the words to that song better than our own National Anthems. Pope Francis, who was a night club bouncer in his younger days, certainly knows the words. I’m not so sure about the Dalai Lama though.

It’s been 55 years since Tequila was recorded and it has since been heard in many commercials and was featured in the movie Pee Wee’s Big Adventure. It’s on every jukebox in every bar in the world. Billboard lists it among the best instrumental music ever recorded. Tequila the song is as well known throughout the world as Tequila the drink. Mexico pours out of every note.

Rogelio never received a dime in royalties. Whatever happened to The Champs? They released a few records after Tequila but they were modestly received and the group faded into obscurity.

What about Rogelio? After returning to Mexico he did get his day in the sun. In 1960 he started the first Rock and Roll band - The Gibson Boys - in Guadalajara, bringing the American sound and words to Mexican audiences. Later, he played with the big bands of Perez Prado and Ramon Marquez just to name a few. He did back-up sax for many of the big named Mexican singers of the time. His “hot jazz” burned up Mexico and everybody who was anybody in the music scene knew his name.

A few years ago, Rogelio (Roy), much older and tired of the grueling life of a musician always on the road, moved back to Chapala to spend his golden years with his son, musician Noe Raygoza, and his grandchildren. He played a few gigs around town with Noe until his health took a turn for the worse. Sadly, Roy died of a heart attack on Sept. 25, one month before he was scheduled for heart surgery.

The next time you hear Tequila raise a glass to Roy and don’t wish him “Rest In Peace,” wish him a “Wailing Good Time” in the after-life basking in the knowledge that his song has become the unofficial National Anthem of Mexico.