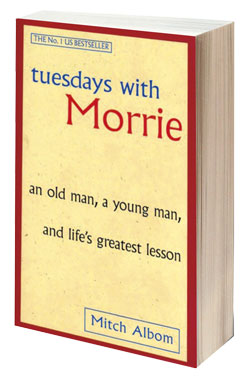 Though it is not our custom to review books in this column, exceptions are what prove the rules. Such an anomaly concerns Mitch Albom’s Tuesdays With Morrie. The book falls into the category of “spiritual/inspirational,” and ordinarily I would not venture within ten miles of this genre. Books such as Jonathan Livingston Seagull, Illusions, and The Celestine Prophecy, all of which are, in our opinion, the intellectual equivalent of baby food, have long since served to inoculate me against this species of literary virus. Such books, straining to be “inspirational” often arouse little more than boredom—and as someone once said about writing, while there are few rules, there are many sins, and cardinal among these is dullness.

However, the book under discussion was recommended by a woman with impeccable taste and a no-nonsense attitude toward all things, literary or otherwise. Thus, with something resembling a slight chip on my shoulder, I began to read . . . and within only a few pages, the author, as well as his subject, Morrie Schwartz, had straightened me out, but good!

Many years before the birth of the book, Mitch Albom had been a student at Brandeis University, where one of his teachers was Morrie Schwartz, a Professor of Sociology. The fun-loving and gregarious Schwartz was greatly admired by all his students, though he forged a special bond with Albom, the man who 20 years later would immortalize him in a book which has become an international best-seller.

Even so, after graduation, the younger man had drifted away, eventually becoming a well-known sports columnist and local TV celebrity in a faraway city. He had not seen his old college professor for almost two decades when one night, quite by chance, he was amazed to see him being interviewed on “Nightline.”

By this time, Professor Schwartz had developed the malady today known as Lou Gehrig’s Disease, an affliction that melts the nerves until the body is about as functional as a pile of wax. Watching the program, Albom decided that very night to fly hundreds of miles to visit his old mentor, hoping to see him before the teacher had taught his “final class.”

Their reunion was joyous and within an hour they decided to enter into a collaboration;  Albom, who despite his professional success had lost his spiritual  way in the world, would document the thoughts and feelings of the older man, who would soon be leaving that very same world. They agreed to meet each Tuesday of every week, until the collaboration was complete, or . . .

Morrie Schwartz wanted to live out what remained of his life with as much dignity, courage, humor and composure as he could muster. He came up with plenty of each, though sadly, dignity is usually the first thing diminished by the grip of impending death. Yet, with little or no attempt to handle any intellectual heavy-lifting, the old professor taught several beautiful and humorous life-lessons as he inched toward the day of his last lecture. The writer was there to record it, and soon after his friend had gone on to his reward, Albom completed what is as inspirational a book as this jaded observer has read in many a moon.

Mitch Albom’s life was greatly enriched by the experience—and it’s a good bet that anyone who reads his valuable little book will someday be able to say the same.