Latinos and the US Economic Growth 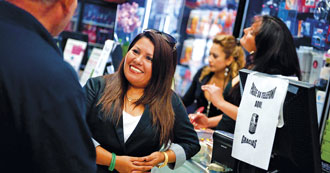 During the recent Feria International del Libro de Guadalajara, the worlds largest International Book Fair, Josefina Vasquez Mota, Mexico’s 2012 PAN presidential candidate launched her book, “Nosotros los dreamers.” In the book she retells the personal stories of 44 immigrants who were brought to the United States illegally as children. If these young immigrants referred to as “Dreamers” are allowed to remain in the US, it is estimated that in the next decade they will contribute US$ 2.1 billion to that nation’s economy.

These estimates are confirmed by a recent TIME Magazine article entitled, How Latinos Drive America´s Economic Growth. From 2007 to 2013 Latinos made up the fastest growing small-business owners in the U.S. According to a study by Standford Latino Entrepreneurship Institute, Latinos launched small businesses at a rate 60 times that of their non-Latino counterparts.  During the past nine years women-owned, or Latina businesses have grown 137%.

When one realizes that all Latinos combined make up only 17% of the US population and 15% of that nation’s workforce, it is amazing to acknowledge the fact that Latinos pump an estimated 1.3 trillion into the US economy per year. Statisticians say that by 2060 Latinos will represent at least 30% of the US population. The TIME article estimated that all undocumented immigrants represent only about 5% of the country´s workforce.

When the current school year began a survey it showed that Latinos spent approximately $75.8 billion dollars on school supplies or about 16% more than “white” households. In real estate Hispanics were responsible for 40% of all home sales from the years 2000 through 2014. Early on Wells Fargo Bank recognized this trend and they have committed a substantial investment to attract the Latino home buyer. In 2015 Latinos accounted for 11%, or USD $27.9 billion in new vehicle transactions. Both Toyota and Honda acknowledge that the Latino market is strong and their advertisement campaigns reflect the buying power of Latinos. A recent Honda ad campaign featured a Latina girl dreaming about being an astronaut, the car´s English language adds aimed at the young American market did not.

A Nielsen report found that in recent years the US beauty care market for both US men and women has declined. However, at the same time Hispanic households spent more for cosmetics, hair care, shaving creams and household appliances.

Latinos in the U.S. are a younger workforce. Young, well-educated Latinos are stepping into the workforce at unprecedented numbers and their buying power helps fuel the US economy by consuming goods that create more jobs. Since the 1980s Latino purchasing power has been growing 70% faster than “Americans,” this according to a 2013 report from the Selig Center for Economic Growth.   The Latino workforce is not only young, but they are well-educated. They are paying taxes that contribute to Social Security and these young Latino workers are paying the taxes that help keep the US afloat. Every million working Latinos will average $500 billion more into the Social Security Trust Fund over the next 25 years; this is more than they will take out. These statistics are from The Wall Street Journal which further states that in 2013 Hispanic households contributed $98 billion to Social Security and $23 billion to Medicare through payroll taxes. Some economists acknowledge that Latino workers are the key to keeping the Social Security system strong.

A CNN report stated that; “With an aging white population Latino youth are many of our future doctors, lawyers and schoolteachers. America´s future economic well-being and competitiveness is increasingly contingent on the success of the Latino population.”

At the turn of the last century businesses often posted signs that read, “Irish need not apply.” Before the Irish the Chinese were discriminated against and many other people whose ancestry were deemed unworthy to belong to the great US. The Evian Conference of 1933 specifically prohibited Jews from immigrating to the US with the result that the German Nazi Party felt free to persecute Jews, just as some radical US groups now feel free to torment Muslims and Hispanics.  But remember a scion of an Irish immigrant became one of the most beloved presidents of the US and the Jews who have immigrated to the US have made tremendous contributions to the US economy, culture, science and medicine. Latinos are no different than any other group of US Immigrants. Latinos want quality education, affordable housing, safe communities, good government and access to health care. Latino success not only impacts the Latino population but it ensures the success of the United States as a whole.