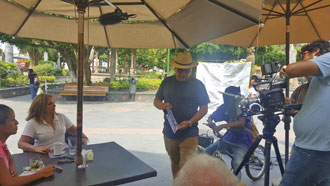 The film Pat y Paco, shot here in the streets of Ajijic a year ago, is now entering post-production. It’s a large production for a forty-minute film and involves twenty speaking roles, a hundred background performers, a crew of more than twenty volunteers and filming fifteen days at forty Ajijic locations. All in all nearly two-hundred Ajijic residents, both Mexican and expat, participated in this non-profit community project.

The theme of this film is friendship. Pat y Paco is a tender, heartwarming story about two youngsters in a small Mexican town who, despite living in two very different worlds, become close friends. Pat is a privileged expat youngster and Paco a Mexican street boy. Their worlds collide through the intervention of an unknown bicycle thief. A friendship develops through the prodding of a kindly, understanding adult and the mysterious powers of a mystical white burro and a magical Lake Chapala. The story has a timeless quality of a fairy tale or fable, and the feel of realismo magico.

This film has special significance in this uneasy and often ugly climate in relations between United States and Mexico. The hopeful and positive story of friendship may serve as a balm in these difficult times and an antidote to the ‘wall’ mentality. Pat y Paco has grown naturally out of its environment and blurs the border between fact and fiction. Many of the characters in the story are based on actual people living here. Even more remarkable, many of those same people are the actors in this film. The story has an allegoric quality reflecting the expat and local Mexican people and how they live together in harmony in the Lakeside area.

Key creative personnel involved are long-standing professionals in the film world in Canada. Manfred Guthe is one of Canada’s top cinematographers, winner of the best cinematographer award at the New York Film Festival and other important CSA awards. John Friesen, Pat y Paco writer, director and producer, has had a long and varied career in the film world as an actor and writer with more than one-hundred productions to his credit. Both have contributed their work as volunteers.

The film is scheduled to be complete and ready for showing some time in the next year. It will be shown locally as well as in film festivals throughout Mexico, U.S. and Canada.