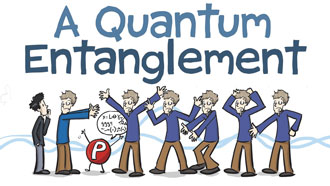 My mind did an exuberant flip this past Easter season when I read in one of my scientific journals that the craziness of quantum physics might explain some of biology’s fundamental processes.

As a self-taught scientific buff and with a life-long belief system embedded in the teachings of Jesus The Christ, and faith, love and hope of a life to come other than our present terrestrial existence, l was elated by the tentative findings of a small group of physicists who explored a strange mechanism to explain how our DNA —the molecule that carries our genetic code, may mutate.

Incredulity was the response of their fellow physicists. This just could not be because we all know that quantum physics supposedly holds sway over the micro scale and cannot govern large biological molecules!!

One specific research team was amazed at these apparent phenomena when they examined the most efficient energy conversion system on the planet - namely photosynthesis. Photosynthesis achieves a whopping 95% energy transfer rate which is more efficient than any other transfer energy process known to man.

Originally it was thought that the energy transfer was along a single pathway but calculations showed that this could only account for 50% efficiency rate which only left the physicists to believe that the energy must exist in a quantum superposition state, travelling along all molecular pathways at the same time - similar to the quantum computer that could simultaneously search all entries - similar to an atomic particle that can be in two positions at the same time.

Now to get back to the reason why l briefly mentioned my belief of faith and love in Christ. Could it be that the phenomenal accounts of Jesus’ post resurrection appearances to his disciples be manifestations of the weirdness of quantum physics being shown in Jesus’ ability as God to disappear or reappear at will, to transport Himself through molecular walls and solid doors and always to encourage and to be with His disciples as they were about to face life in all its bitter sweet reality?

Is this another small window into the wonder of God’s continuing creation and the wonder of the sciences which are opening up avenues of thinking hitherto unknown?

And for those readers who may be professional scientists, I would like to close by saying that the above mentioned theory and information is still tentative and yet has to be proven by repeated experimentation and consensus by the scientific community.

And for those rank and file readers, like myself, I hope that your incredulity will not keep you from an open mind and a continual love of learning on issues that really matter not only for this present life, but for the life to come.

This World of Ours - April 2011
THIS WORLD OF OURS By Bob Harwood bharwoodb@hotmail.com   The Power Of Words   As Comforter in Chief, he honored the fallen, saluted