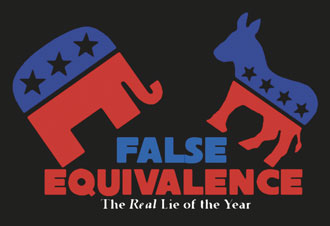 A columnist for El Ojo del Lago wrote in the May issue that “People, liberal and conservative alike, do not like having to think about arguments with which they disagree. That’s why people seek out news outlets that reflect their own biases. If you only hear opinions you can enthusiastically agree with, you are necessarily uninformed.”

The columnist thereby commits the logical fallacy of false equivalency. The first criterion should be the value of the opinions with which we enthusiastically agree. To suggest that Fox News deserves the same respect as the BBC is to abandon basic critical thinking skills.

“Conservative” and “liberal” describe different behaviors that have been studied by various disciplines. Satirists understand the difference, as when Stephen Colbert wryly said, “Facts have a liberal bias.”

This was a twist, because facts are neutral. Bias is the intruder that distorts the facts, cherry-picks them out of context, or even makes up fantasy facts in order to massage some internal need. Liberals are more fact-oriented than conservatives; hence, they have a propensity for self-correction. Conservatives have a wonderful new term for facts of their own creation: “alternative facts.”

Economist Paul Krugman, a Nobel Laureate, said, “Republicans believe many things that aren’t so, and no amount of contrary evidence will get them to change their minds.” Krugman’s observation is buttressed by empirical evidence. For example, Republican supply-side economics is a failed economic theory. Yet, because of stubborn ideological devotion, conservatives refuse to acknowledge Keynesian economics, which in both theory and practice actually works for all the people and not just the top few.

Chris Mooney has written a book that is a compilation of scientific writing from various disciplines. It is titled The Republican Brain: The Science of Why They Deny Science and Reality. He reports on seven different studies that show the viewers of Fox News to be the most misinformed people in America. For example, almost 70% of the Fox News audience believes Saddam Hussein was working closely with Osama bin Laden, but only 16% of people who get news from NPR/PBS believe that falsehood. Hussein and bin Laden were bitter enemies, not allies.

A study at the University of Alabama showed that conservatives are less interested in viewing scientific data. A study at Yale showed that offering fact-based rebuttals to misinformed conservatives only makes them cling more stubbornly to their misinformation. The Texas Republican Party officially opposes the teaching of critical thinking skills in their state platform. In other words, they want kids to be trained to work and be obedient citizens. Conservatives want to “protect” children from studies in the humanities that teach them to think independently and thus become a threat to Republican ideology. Conservatives gravitate toward indoctrination rather than toward education.

Conservatives confuse critical thinking skills with indoctrination. They complain that colleges indoctrinate students into becoming liberals. But college doesn’t turn students into liberals. What happens is that those with a penchant for critical thinking skills are attracted to the liberal arts colleges; the non-thinkers are attracted to vocations that emphasize training rather than thinking.

The columnist should have specified that it is “Conservatives who seek out news outlets that reflect their own biases.” Liberals are curious and seek to be informed – not reinforced in their personal biases. Several  commentators noted that conservative George W. Bush was the most incurious president we ever had. If viewers who don’t watch Fox News are better informed, then obviously they are choosing to be informed rather than to comfort their biases.

A liberal arts education means a background in the humanities, the social sciences, the natural sciences, and mathematics. There is no such thing as a “conservative arts college.” There is a reason why 97% of college professors identify as liberals. They concentrate on intellectual honesty and accept facts as they are. A liberal is more comfortable with ambiguity, while conservatives see only black and white, yes and no. A liberal is more excited by not knowing and wants to find out. A conservative, especially one who is religious, already knows everything and has no need for further investigation or research. Religion and ideology have provided all the information they need inside the safety of their impermeable bubble.

Global warming, for example. Liberals want to understand it better and favor more research and green energy. For conservatives, it’s a hoax, so there’s no need for research and they want to burn more dirty coal. Therefore, the Trump administration wants to drastically cut the budget for the EPA, fire many of the scientists, and put a gag order on the rest.