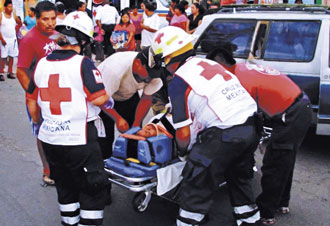 There are many positive perspectives about emergency care at Lake Chapala, which has better medical care than remote parts of Mexico and is only 30 minutes away from first-class hospitals in Guadalajara. Getting treatment within the “golden hour” as doctors call it, increases odds of survival.

For expat residents and visitors at Lake Chapala, here are two emergency tips that include some basic Spanish. Remember, minutes count.

1. Call 911. If the responder doesn’t speak English, say something like this: “¡Ayuda! Es una emergencia médica. Necesito una ambulancia inmediatamente. Mi nombre es xxxxxxxx, y mi ubicación es xxxxxxxxx. Mi teléfono es xx-xxxx-xxxx.”(Help! This is a medical emergency. I need an ambulance immediately. My name is xxxxxx and my location is xxxxxxxx. My telephone is xx-xxxx-xxxx.)

2. The Cruz Roja ambulance will probably take the patient to the nearest Cruz Roja facility for triage. If paramedics decide the patient needs to go to an emergency room in Guadalajara, have the paramedics alert the ER and describe the emergency.

As an expat living and traveling in Mexico, I know of serious medical emergencies that occurred at Lake Chapala and elsewhere in Mexico. Most people survived but some didn’t, partly because they failed to get treatment quickly enough. In Mexico, the difference may be the ability to speak a little Spanish.

More than six years ago, on the Baja peninsula, one of my friends choked during dinner one night at her remote hillside home. Dinner companions tried the Heimlich maneuver unsuccessfully, and called for an ambulance. But there were no street signs, they didn’t speak Spanish well enough to give precise directions to the location, and they had to drive her by car to the ER 40 minutes away. She was D.O.A.

In late April of this year, the husband of an expat writer friend became seriously ill during a getaway weekend at an upscale hotel in Chapala. He was unable to walk or talk, and was almost unconscious. Fortunately, the wife speaks fluent Spanish, and could explain the situation to Cruz Roja emergency responders. She suspected carbon monoxide poisoning from a faulty hot water heater outside their room, and the ambulance sped them to a Guadalajara hospital within 30 minutes. Extensive lab tests confirmed the suspicion of carbon monoxide poisoning. After multiple hyperbaric oxygen chamber treatments and lots of anxieties during three days, the husband was well enough to travel. Also, consider buying a battery-operated travel version of a carbon monoxide detector. Many hotel rooms and rental houses don’t have them, even in the USA. Some models are available online for only $30, or at hardware stores. I bought one after reading her experience.

--Mikel Miller’s book I Love Baja! is available on Amazon.