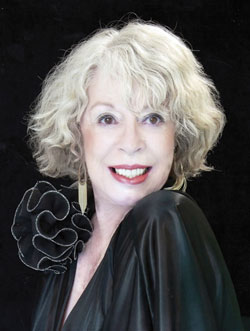 That’s what Barbara Clippinger says about herself but when she talks about her career it’s clear that she has boundless energy, dedication, lots of talent and a willingness to step out to adventure.

Those of us who were quick enough to get tickets to Chicago, the latest Lakeside Little Theatre’s musical production, know Barbara as the director of this fabulous show. Here’s the story of how she got here.

She started her career at age four, a little girl who had weak ankles. The doctor advised putting marbles in the toes of her shoes and walking from one end of the room to the other to build strength, but that wasn’t successful so her parents enrolled her in ballet lessons….and she loved them. Then she started tap, then classes in character, acrobatics, hula, and jazz.

Barbara went to dance class five times a week from age eight through high school. Did she miss out on other activities? She says, “I didn’t know I was sacrificing. It’s just what I did.” She later was to take lessons all the way to age 60. “It just felt so good, a great way to express myself.”

When she was 13 and in the eighth grade she pretended to be 16, auditioned and got her first job. She danced in grandstand shows at state fairs in the summers, all the way through high school.

Barbara’s parents were conservative, her father a banker and her mother a PTA president, and maybe they thought she had a chaperone. She was “chaperoned,” more or less (mostly less) by the wardrobe ladies. The parents also may not have known about all the many fascinating and off beat people Barbara met at the fairs.

She says, “It was fascinating. I loved the carnies. I got to meet people like the Flying Wallendas and members of the Cotton Club Review.”  Barbara enrolled at the University of Miami at age 17 where she was a cheerleader and danced in school musicals and summer stock throughout the East Coast and Midwest. Then she met a choreographer who changed the course of her life when he said, “You could be a working dancer. You should go to New York.”

Barbara had met a girl named Anya Flesh (more about her later) at the Kansas City Starlight Theater. She and Anya both wanted to see more of the world so at age 18 they went to New York and rented an apartment in a brownstone building for $75 per month (this has been a while). The landlord was a theater person and let them reduce the rent to $35 if one of them was out of town performing. Later Anya got married and Barbara’s career progressed. They eventually lost track of each other.

After being in New York for two months she had another adventure, She went to South America with a vaudeville company and danced there for six months. The members of the troupe weren’t paid and were stranded there. Her father sent her $100 and six of them lived on it for a week.

Unlike the aspiring dancers in the movies who are waiting for their big break or at least a bit of employment, Barbara always had work. After she danced in Europe for a year she got an act together, “The Linden Trio,” hired an agent and got bookings. We know from her Lakeside Little Theatre bio that she was a dancer and assistant choreographer at the Latin Quarter in New York for two years, as a “June Taylor Dancer” on the Jackie Gleason Show for two years, and with “Golden Boy” on Broadway with Sammy Davis Jr.

Barbara does remember one five month period between jobs. She went to the University of Miami and enrolled in a year-long PanAm flight attendant school. When she interviewed for a job they said, “Get your teeth fixed and come back.” She didn’t.

Here’s our first mention of Ajijic: in her 40s Barbara dated a man who had his own plane. Together they flew all over, to Mexico, and someone mentioned Ajijic around that time but she had heard about all the old people here and wasn’t interested.  What did interest her was discovering Bali and those “wonderful handmade things.” She and the airplane guy started a business and imported Indonesian crafts and goods for two years.

“You’ve had a lot of fun,” I say. Life did take a serious turn when she went back to school at Fullerton State University in California and got a master’s degree in psychology. She applied that knowledge in her work as a program director for a battered women’s shelter and later as director in a homeless shelter, for a total of about 15 years.

By now Barbara had a husband who was turning 65 and they were looking for a place to retire. She remembered Ajijic and “all those old people” and decided to come down here and look around. She checked into a B&B and in less than 24 hours found a note on her door asking her to choreograph a Lakeside Little Theatre production. Also, at dinner in Ajiic she met a woman who amazingly was Anya Flesh’s neighbor in Florida.

Barbara moved here with her husband in 1997. She called Anya, the former 18 year old roommate, after a 40 year hiatus, and Anya came to visit Barbara in Ajijic and decided to move here. Barbara says, “Anya directed some wonderful plays and a couple of musicals and I choreographed them for her.”

Later single, she met Mac Morison in a show and thought he was “a fabulous singer.”  They were married in 2013. Barbara says, “Would you say something about how lucky I feel to have met Mac and married him at this time of her life?” Well done, Barbara!

Barbara says she’s retired but she’s helping Mac in his March variety show, Simply Standards, at Club Exotica, and they’re planning a nice vacation to Guatemala, Nicaragua, Panama and Colombia. It’s hard to believe that this talented and energetic lady is going to disappear from the local entertainment but we certainly hope she doesn’t!

(Ed. Note: I was present when the LLT first opened its doors in 1987. Rocky Karnes, a well-known Hollywood character actor {The Caine Mutiny, It’s a Wonderful Life}, directed the first play, Don’t Drink the Water, and I directed the second production, Arsenic and Old Lace. In the years since, I have seen more than  a few superb LLT  productions, many of them directed by either Richard Vath or Anya Flesh. Richard was a theater director by profession, having supervised many plays all over America for New York’s Nederlander Organization, while Anya, also a professional stage director, had been responsible for several unforgettable LLT productions ever, including Cabaret and The Miracle Worker.

Richard Vath and Anya Flesh are considered among the finest directors to have ever been associated with the LLT, but in the opinion of many, Barbara Clippinger must now be added to that same elite group. Her production of the Hollywood and Broadway Revues, and this season’s Chicago (along with her other wonderful  shows) , have more than earned her inclusion in such a distinguished group.