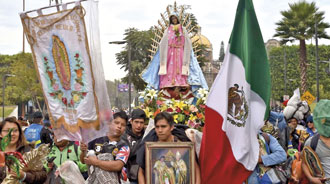 From pre-Columbian times the peoples of Mexico have been deeply religious. It is not, therefore, surprising that even the poorest village has a church or that many of them should be impressively large and lavishly embellished with gold, silver and statues.

Among those there is usually one especially beloved image who often gives the village its name and is its patron saint. Though cherished and always the focus of an annual fiesta which can last for a week or more their influence is limited.

There are a few legendary miracle workers, however, who are worshipped by the entire nation.

The Virgin of Guadalupe 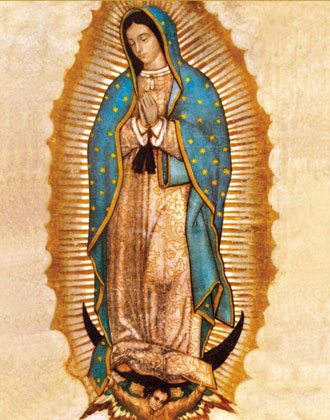 The First Lady of Mexico is not the wife of the President. That honor is reserved for the Virgen de Guadalupe who first appeared on December 8th, 1531. A humble peon and new convert named Juan Diego, who has recently been canonized, heard heavenly music and a sweet voice calling his name and beheld the Lady “radiant as the sun” who asked that a church be built on the spot where she stood.

This place, the hill of Tepeyac, had long been sacred to Tonantzin, Aztec Goddess of Earth and Corn, until Archbishop Zumarraga ordered the destruction of all pagan shrines. Tonantzin, also a virgin and a mother, had been so deeply mourned that it was widely believed this new Lady, if not her reincarnation, had been sent to take her place. The local Franciscan Fathers were more sceptical and it took several incredible events involving Castilian roses blooming where only cactus had grown and the miraculous appearance of the Lady’s portrait imprinted on Juan Diego’s mantle to convince them, but the shrine was built.

The miracles continued. Besides numerous cures she is credited with abating a terrible epidemic in 1544 and causing the disastrous flood of 1629 to subside. In 1754 a Papal Bull declared her Patroness and Protectress of New Spain. So she has remained and December 12th, the anniversary of her first miracle, is a National holiday. 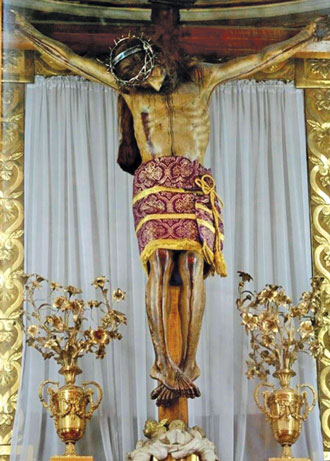 In 1533, in a remote and savage area, two Augustinians preached with little success to people who worshipped and feared Otzocteotl, God of the Caves, a cruel deity who still sometimes demanded human sacrifice. Impressed, but fearing to abandon Otzocteotl in favor of this unknown God, they promised to think it over and give their answer in three days.

When the two friars and their few converts proceeded to the cave bearing a simple cross with which they hoped to replace the dread idol, they found there was no need. The idol lay in pieces on the floor of the cave and in its place stood the crucifix of the Senor de Chalma! All traces of paganism had disappeared and the cave was filled with flowers and incense.

The miracles began at once. He rid the area of dangerous animals and poisonous reptiles, rescued any who were in danger and convinced sinful couples to repent. So many pilgrims flocked to worship that, in 1683, a huge new church was built with the Señor enshrined on the altar. The crowds were so enormous that a schedule was set up by area; January for Aztecs and Otomis; February for Zapotecs; etc. Even so, the tiny village of Chalma is constantly besieged by the thousands encamped around it.

The Virgin of the Remedies 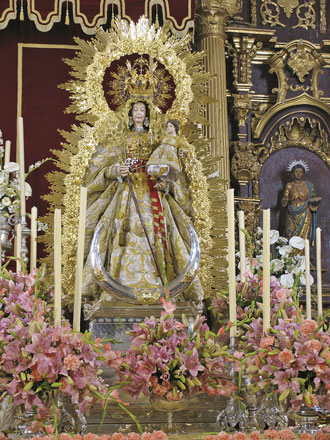 This tiny image, barely a foot high, came from Spain in the baggage of one of the conquistadors. When Cortez ordered the Aztec idols thrown down from their temples, she was all they had to replace them. Needless to say, she was often seen, along with Santiago, leading the way to victory and was given the title of La Conquistadora. On the Noche Triste, when the Spaniards were driven from Tenochtitlan, it was she, they say, who powered Alvarado’s miraculous leap to safety.

Unfortunately, the little Virgin was lost in the confusion and was not found until 20 years later when a series of miracles established her identity and importance. Her shrine was always favored by those of Spanish descent.

When Hidalgo gave his famous cry for freedom in 1810, invoking the name of the dark-skinned Virgin of Guadalupe, the Royalists immediately countered with Our Lady of the Remedies. The two Virgins must have been surprised to find themselves leading opposing armies, especially when a battle flag bearing either image was captured and shot as a traitor. 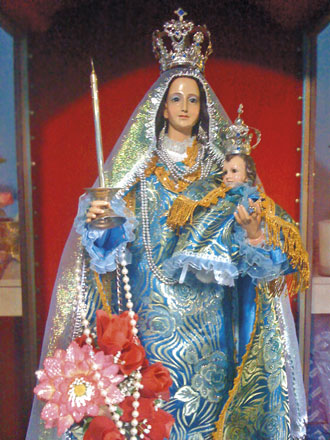 Is a small figure molded of vegetable paste who, during an native uprising in 1542, disappeared and was later found in a remote hut, battered and stripped of her regalia. Once restored to her worshippers she began performing miracles. When a circus performer accidentally stabbed his daughter in the throat everyone thought the child dead. The frantic mother, however, rushed her to the church and appealed to the virgin. The child lived without a sign of the terrible wound. The grateful father took the image to a shop in Guadalajara where two beautiful young men promised to mend it. When he returned the Lady was waiting in perfect condition but the youths, now believed to be angels, had disappeared.

In 1732 the first stone was laid for the present sanctuary and an annual fair in honor of the virgin was authorized. It begins on February 2nd, lasts for 15 days and is attended by thousands of pilgrims, many of whom walk great distances in fulfilment of vows.

The Virgin of Zapopan 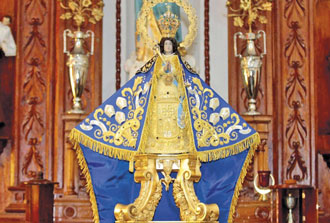 The Virgin of the Conception, no more than ten inches tall and dark skinned, is another Jalisco miracle worker who came to fame during the Miston uprising. When Father Antonio Segovia displayed her at the height of a terrible battle, the natives immediately surrendered. Many of the former rebels settled in the village of Zapopan and Segovia made them a present of the image. Many miracles have been reported and many honors have been conferred on her, including a generalship in 1821.

In 1734 she was made Patroness of the Rains and, during the rainy season from June 13th to October 4th of every year, she visits every church in Guadalajara and its vicinity. Since there are many churches, she can spend only a day or two at each one but she is always greeted with great joy and sent on her way with sadness. Streets and houses are decorated with blue-and-white streamers, triumphal arches of flowers and palm fronds are constructed all along her route and great crowds of the faithful follow her special car.