Missing a makeable slam is one of the more painful experiences in bridge. Of course, bidding a hopeless slam is not much fun, either! This is an area of bidding that often confounds less experienced players who regularly launch into the Blackwood convention at the slightest hint of extra values. But, as Easley Blackwood himself often stated, his invention was designed to stay out of bad slams, not get to good ones!

In this month’s hand, which herself and myself (sitting South and North respectively), played at the Lakeside Bridge Center, our use of another popular convention helped steer us to the optimum contract. South opened the bidding 1 heart and North immediately had visions of (at least) a small slam. After all, he had a very powerful hand of his own with 5 good trumps, 16 high card points and great outside controls, you could say it looked like a slam-dunk.

West passed and North bid 2 no trump, the Jacoby Convention that announced the combined values for game (or higher) with hearts as trump and asked for a further description of South’s hand. Holding a minimum opening bid, and with no extreme shortness (a void or singleton) in any outside suit, South made the correct descriptive rebid of 4 hearts. Other rebids that South could have made included: 3 no trump (intermediate values, no shortness) 3 hearts (maximum values, no shortness), 3 clubs, 3 diamonds or 3 spades, each showing a singleton or void in that suit.

4 hearts was not the response North was hoping for so he paused for some contemplation. It is generally agreed that at least 33 points (including distribution points) are required for a small slam in a suit. A jump to game by partner was the weakest rebid she could have made. The very good trump fit would only be useful if one hand or both could ruff a number of losers, but since North had no extreme shortness either, he reluctantly felt obliged to pass.

West led a low club which declarer ducked in dummy. East won the King and returned the suit, won by dummy’s Ace. Trumps were now drawn, ending in the closed hand. Declarer now cashed the Ace and King of spades, crossed to dummy’s Ace of diamonds (maybe the singleton King would appear!) cashed the Queen of spades, pitching a club from hand and conceded a diamond trick – making 5.

Had South rebid anything but 4 hearts, North would have felt comfortable with continuing on to the 6-level at least. Even showing a minimum, it was still possible, if unlikely, that a slam could be made, but it would have been a complete guess. Fortunately, the use of the Jacoby 2 No Trump Convention had proved invaluable in this deal.

And, also noteworthy, the Blackwood Convention would have been absolutely useless in getting to the best spot. 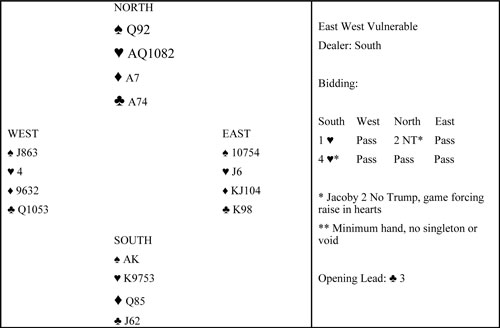