Most students of the game agree that defense is the most difficult part of bridge. It is easy to understand why – each defender can see only half of his partnership’s assets whereas the declarer has the benefit of seeing all 26 of his side’s cards.

Still, there are many devices that even less experienced players can employ to complicate life for declarer. One such tactic was available to East in this month’s deal but that player failed to grasp the significance of his discarding and handed North-South a top board in a game played at the Lake Chapala Duplicate Bridge Club in Riberas.

South opened the bidding 1 No Trump showing 15 to 17 high card points.  West passed and North responded 2 hearts, the Jacoby Transfer bid showing at least 5 spades and an, as yet, unspecified number of points. After a pass by East, South accepted the transfer with the bid of 2 spades.  North now made a forcing bid of 3 clubs showing at least four clubs and therefore, combined with her previous bid, an unbalanced hand, warning her partner that No Trump could present some problems. However, with stoppers in both hearts and diamonds, South opted for the 9-trick game.

West led his fourth best diamond and declarer took a timeout to count his winners. He could see 5 clubs and 2 spades but additional tricks would depend on the location of his opponents’ honor cards. The perilous nature of his heart holding suggested it would be in his best interest to keep East off lead if at all possible.

Declarer crossed his first hurdle when he called for a low diamond from the dummy and was relieved to see East produce the Queen, strongly suggesting that West held the Ace.  So, at trick two, South returned a low diamond to dummy’s 9, which held the trick. Declarer now returned to his hand with a low club to his Ace, followed by the Jack of diamonds, taken by West’s Ace. That player exited with his last diamond to South’s 10.

South’s contract was now safe, with 3 diamond tricks in addition to the seven black card winners actually producing an overtrick. But as additional overtricks are like gold to duplicate players, South decided to run all his club winners before playing the spade suit. And this is where East fell from grace as he threw all his useless spades away as declarer cashed his clubs. As a result, when South played the Ace of spades, East showed out and it was simplicity itself for declarer to finesse West for the spade Queen and end up with 12 tricks.

But just imagine, if East had pitched low hearts and held on to all his spades like someone who was guarding the Queen, would South have had the courage to take the spade finesse in the end-game? Probably not, as a loss to the Queen and the expected switch to a heart through his shaky holding could reduce a certain 10 tricks to 9.

So the lesson from this hand is that sometimes defenders have to “protect” their partner’s holding by pretending to hold something they do not. 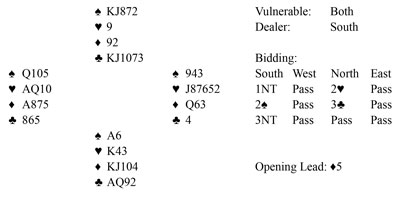