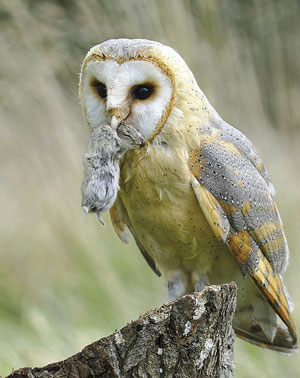 The Barn Owl is one of the most widely distributed species of owl, found almost everywhere in the world except polar and desert regions and the Pacific islands. The Barn Owl is a pale, long-winged, long-legged owl with a short square tail. Depending on subspecies, it measures about 9.8–18 inches in overall length, with a wingspan of 30–43 inches. Tail shape is one way of distinguishing the Barn Owl from other owls when seen in flight. Their light heart shaped face with its black eyes give the bird an odd, eerie appearance.

Their color typically varies between a light brown and a dark grey especially on the forehead and back feathers. Some are a golden brown, but all have fine black and white speckles. Their heart-shaped face is white; in some sub-species it may have a hint of brown. Males tend to have fewer spots than females and the females are larger, as is common with owls. Contrary to popular belief, they do not hoot like a great horned owl; they make a characteristic shrill screech.

When captured or cornered, they throw themselves on their back and flail their sharp taloned feet, an effective defense; as we found out with our first rehab. Also in such situations they may make a raspy, clicking sound, produced by the bill and tongue, or a hiss sounding similar to air leaking out of a tire, to frighten away intruders.

Like most owls, the Barn Owl flies silently; tiny serrations on the edges of its flight feathers help to break up the flow of air over its wings, thereby reducing turbulence and the noise, giving it an advantage over their prey. They hunt by flying low and slow over an area of open ground, hovering over spots that conceal potential prey. Barn Owls are nocturnal feeding primarily on small mammals, particularly rodents. Studies have shown that a nesting pair and their young can eat more than 1,000 rodents per year.

The Barn Owl has acute hearing, with ears placed asymmetrically for improved detection of sound position and distance, they do not require sight to hunt, they  target and dive down, penetrating its talons through snow, grass or brush to seize rodents with deadly accuracy. Compared to other owls of similar size, the Barn Owl has a much higher metabolic rate, therefore requiring more food. Pound for pound, they consume more rodents, than possibly any other creature.

This makes the Barn Owl one of the most economically valuable animals to farmers. Farmers often find these owls more effective than poison in keeping down rodent populations; many encourage Barn Owl habitation by providing nest sites.

Unfortunately most only manage to breed once in their life, falling victim to predators or accidents before reaching two years of age; only one young in three manages to survive to its first breeding attempt. Due to the increased use of poisons and loss of habitat in some areas, Barn Owls are listed as endangered species; in most areas they are now considered a species of concern. 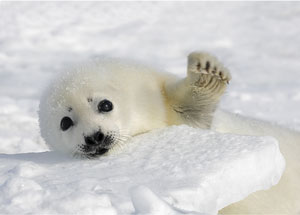