Confessions of a Former Cook 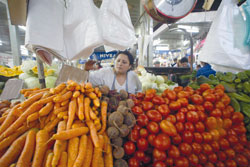 I confess. My maid has to dust my stove. Since moving to Mexico, I’ve acquired a complete aversion to cooking. It isn’t that I‘m unable to cook, or that I don’t know how to cook. I simply hate to do it.

I think it started while I was growing up and my Mom was working full time. She always wanted dinner on the table when she got home, which became my job. Mom was from the generation that everything cooked came out of a can or a box. We rarely had anything “fresh.” Vegetables were cooked until limp.

While in college and nervous about meeting my fiancée’s parents, I tried to make a good impression by volunteering to help in the kitchen. My future Mother-in-law told me I could mash the potatoes. I searched the entire kitchen searching every cupboard and in the pantry. I couldn’t find them. I finally had to break down and ask where they were. “They’re in the sink” she responded.

Of course I had already looked in the sink, but there was no box there…only potatoes. Until then I didn’t know that mashed potatoes came from, well, mashing actual potatoes. I’d made mashed potatoes all my life-- they came from a box. Flaked! She laughed knowing she had her work cut out for her.

They lived on what some people called a “hobby farm.” But it was no hobby; it was a lot of work. They had limited means, and had to make the most out of everything. They raised their own chickens, and each year, they put in a huge vegetable garden. She baked everything from scratch. Nothing was ever wasted. When a turkey was cooked, the carcass became soup stock. Scraps of food fed the dog and whatever else was left over became compost for fertilizing the garden. The center of that home was the kitchen. I learned a lot.

That education came in handy when I moved to my sister’s farm to help out during her third pregnancy, I spent entire days in the kitchen. A farmer’s day starts early with a snack before the morning chores. While they were out, I was busy inside the kitchen making their breakfast--platters of eggs, sausage, bacon, toast, biscuits, pancakes or waffles, potatoes, juice, and coffee. Their mid-morning snacks were packed while they had breakfast.

Once they left for the fields, the day’s baking began as well as the preparation for lunch which on the farm was a full meal of meat, vegetables, bread, fruit, salads and dessert. And again, their afternoon snack was packed for later in the afternoon while they worked in the field. Supper, of course, was another full meal. I learned to hate the kitchen. Over the years, I fell back into using convenience foods, canned, pre-prepared and quick and easy. But the food wasn’t healthy. It was packed with preservatives and other mystery ingredients.

Moving to Mexico cured me of my convenience food reliance, as many of the items just weren’t available here. And everywhere I look, there are wonderful freshly grown, fully ripened fruits and vegetables. There are plenty of people who sell fresh foods in my neighborhood. My shopping can be done by walking around my block, and getting all the fresh food I need, and buying from the many neighborhood cooks who put out roasted chicken and potatoes, or tacos, tamales or other delights.

So, unless you are an aficionado of the food network and get true joy from cooking, do what I do, just walk about your neighborhood and let your stove accumulate dust.