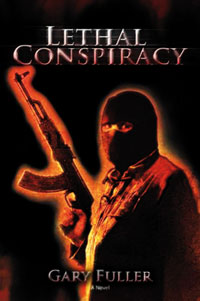 I’ told my wife, not as kindly as I wanted to: “Don’t distract me. I’ll eat dinner as soon as I finish the book.” When I got to the end of Lethal Conspiracy, I jumped out of my chair as if I’d been stung by a scorpion and whooped out loud: “Yeow, what an ending!” I wiped my sweaty palms dry, took a deep breath and sat down to a very cold dinner.

I liked the book. A lot. The armed, cloaked terrorist on the cover suggests the extreme danger lurking in the pages of Gary Fuller’s Lethal Conspiracy. A spy thriller is supposed to grab us by the throat, throw us against the wall like wet spaghetti, assault our sensibilities and make us submit to the twists of the author’s imagination.

In Gary Fuller’s first novel, he combines his intimate knowledge and inner workings of military intelligence, his career as an Air Force officer, and expert knowledge of the Middle East to present us with a plausible plot that not only thrills, but brings information to the reader. I was drawn in by the authenticity of Fuller’s knowledge. It seemed to me as if he was writing from the inside out when it came to the complexity of the political climate and hidden loyalties of the powers at work there.

Like a weaver, carefully preparing the warp and woof of a tapestry, Fuller unwraps his villainous and virtuous characters, and with each new personality adds texture to the story and builds intrigue. The book coils itself around us, tightening its grip in such a way that we begin to experience the world through the life of reluctant hero Dr. Steven Grant, who is recruited by the CIA as the only person in a position to thwart a terrorist plot that originated from a cell embedded in the United Nations.

We are transported inside that drama then vicariously find ourselves in Grant’s position of being the only person able to thwart the threat of worldwide nuclear holocaust that would most certainly bring colossal destruction to Israel and the United States. Steven Grant finds himself in this position not because he set out to become an international hero, but because life placed him where he didn’t want to be.

I hate a book like this that grips me so hard I can’t put it down, driving me to hurry only to be disappointed because it all came to an end so quickly. Thrillers are like that. As a spy thriller, it succeeds. Like a bull dozer, the book relentlessly pushes the reader closer and closer to the edge of the climactic cliff. In a few places, the pace slowed and just when I was tempted to speed through a few paragraphs to get back to the action, it wrapped its coils around me like a huge python that would not release its grip, clobbered me and squeezed my stomach again!

No book is perfect. The intensity of the romance is quite vapid and while reading, I kept arguing with the author that the brief encounter with the beautiful female psychologist could not account for the intensity of their mutual fantasy of a life together. Even though the terrorist wanted to also kill his new infatuation, Fuller needed to show much more heat between them to make their relationship believable. Fortunately, the plot is rich enough to carry the story in spite of the tepid sexual tension.

As a first novel, I am eagerly awaiting Gary Fuller’s next novel. He has proven to me that he knows how to sink his talons into a reader’s mind and leave us satisfied enough to keep coming back for more.