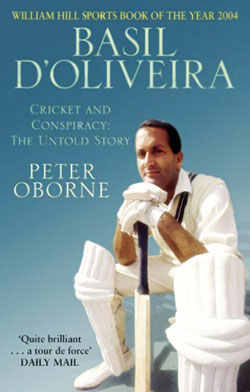 Basil D’Oliveira died today in England. He was 80 or maybe 83; his real age was always a mystery. I saw him play in Kidderminster in 1964 and I followed his career with interest. “Dolly,” as he was known, was a professional cricketer. He became famous as the man who caused South Africa’s sports isolation to begin in 1968; an isolation that was not lifted until Nelson Mandela was released from prison and apartheid in South Africa was dismantled.

Most Americans know that Jackie Robinson broke the color barrier in baseball. While Dolly’s case was not the same and he didn’t have to endure what Robinson endured in his first year, there are similarities. In South Africa, where he was born, the D’Oliveiras were branded as Cape Coloreds. This meant that despite being an outstanding cricketer he was not allowed to play with whites in the major league. Cape Coloureds were neither African nor Indian but often a mix of those races and whites. His name suggests a family background from Portuguese Goa, and he looked Indian.

American’s don’t know much about cricket and some even confuse it with croquet. But cricket by the 18th century had professional players, making it the world’s oldest professional team sport. Today it’s the second most watched sport in the world after soccer. However in America it is so unknown that many web sites purporting to list the world’s top spectator sports don’t even list it.

It’s similar to baseball in that runs are scored by hitting a thrown ball with a bat. However it’s a much tougher sport than baseball and injuries are more frequent. The balls used in both sports are very similar but a cricket ball is slightly larger, harder and heavier than a baseball. Only the catcher is allowed to wear gloves and the other players must field the ball bare-handed which is the cause of many broken fingers. I write from personal experience.

In cricket the pitchers are called bowlers and it’s legal to throw the ball at the batter, which is why today they wear so much protective equipment. In both games the ball can reach 100 mph on its way to the batter although it occurs less often in cricket. Another problem cricket batters face is that bowlers bounce the ball in front of them; this adds vertical movement making it more difficult to hit.

When D’Oliveira was able to put together enough money to buy his passage to England he was already 28, or likely older and past normal cricketing prime. After three years in the minor leagues there, he made it to the major league and quickly became a star. Then he was picked to play for England’s national team and this led to his second brush with apartheid.

After a wonderful performance against Australia, Dolly was surprisingly omitted from the England team picked to tour South Africa later in 1968. Regrettably sports and politics often intertwine; South African Prime Minister, John Vorster, had informed England that they would not play against a team that included non-whites. The financially-minded English cricket authorities gave in and left Dolly out, setting off an unprecedented national uproar. However when a player originally picked was injured, England’s cricket authorities suddenly found their backbone and replaced him with D’Oliveira.

With quiet dignity, Dolly refused to be drawn into the uproar and it was only later known that he had turned down a lucrative coaching contract, arranged by the South African government, to try and make him unavailable for the England team.

The South African authorities confirmed that his inclusion was unacceptable and England cancelled the tour. All nations decided to follow this example and South African teams were boycotted from the international arena in all sports. The boycott lasted 22 years and hurt that white minority-ruled and sports mad country, more than any other sanction against them.

Rest in peace Dolly, you earned it.