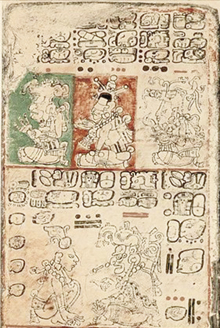 Literacy is often considered one of the distinguishing features of any civilization. In ancient of Mexico the codices, or painted hieroglyphic books, of the Maya, Aztecs and Mixtecs illustrate graphically the development from oral or spoken tradition to written or literally expression.

Most native records were destroyed during the Spanish Conquest. But from the Classic Maya area in Yucatan four pre-Hispanic ritualistic-calendarical screenfold manuscripts have survived: the Dresden, Madrid, Paris and Grolier. A few early Aztec codices have been found but most of the genuine pre-Hispanic manuscripts come from the Mixtec area of Oaxaca. After the fall of Mexico-Tenochtitlan in 1521 some four hundred native or colonial documents were produced. The common style of the Aztec and Mixtec codices is referred to as “ Mixtec-Aztec.

The content of the codices ranges from the business-like tribute lists of Moctezuma in the Codex Mendoza to the historical and genealogical Mixtec narratives in the Vienna Codex and the astrological almanacs of the Yucatan Maya in the Resden Codex. Recent studies show that the ancient Maya made great strides toward a truly phonetic script such as we use today. However, the Mixtec-Aztec writing system, which at first appears the more primitive, was in some ways even more flexible than the Maya.

Mesoamerican writing system comprises pictograms, ideograms, rebus writing, and phonetic or syllabic elements. For example, in the Dresden Codex, a realistic picture (pictogram) of a plaited reed mat represents exactly what it is, a reed mat. But because Maya chieftains customarily sat on such mats, it also symbolizes the concept of authority (ideogram). The quetzal bird and the serpent, standing for the Toltec culture hero, Quetzalcoatl (Feathered Serpent), is an example of rebus writing. Phonetic elements, which abound in the Maya hieroglyphic texts, represent the actual spoken sounds of the underlying language.

The Maya writing system was language-bound. Only a priest of scribe who spoke the language could read the phonetically-based hieroglyphs in the codices. In contrast, the Mixtec-Aztec writing system was cross-linguistic. An Aztec priest or scribe who spoke only Nahuatl could be understood by his Mixtec-speaking counterpart in Oaxaca. In both cases, the pictorial parts of the manuscripts would have helped in the interpretation.

Today, silent reading is taken for granted. But even in ancient Greece reading aloud was the rule rather than the exception. The Codex Mendoza from Mexico-Tenochtitlan (AD. 1540 to 1542) contains a history of the Tenochca Mexica in three parts: the founding of the Aztec capital to its fall in 1521, a pictographic record of the tribute paid to the Aztecs by subject towns, and a detailed portrayal of daily Aztec life.

In this manuscript we can actually trace this development from oral to written or literally forms of communication.

The oral tradition in the Codex Mendoza is represented by the Tribute Roll of Moctezuma, a pictorial account of the pre-Conquest tribute paid to the Aztecs. A later copy contains a written explanation of the pictograms in both Nahuatl and Spanish. In this transitional stage the meaning of many glyphic elements can be deduced from the written version. Finally, a prose text of the same tribute list, written around 1554, represents the strictly written or literary tradition.

The ancient Maya and Mixtec-Aztec writing systems were capable of conveying remarkably accurate information through the skillful blending of pictorial and phonetic elements in the same text. The ancient Maya, Aztec, or Mixtec reader was thus provided with a kind of visual-memory, not unlike the modern mass media. For example, on TV we not only hear the words of the speaker we see both images and written messages. In this sense we have come full circle from oral tradition through written tradition back to a mixture of both.

On the high road to literacy, the Maya, Aztec, and Mixtec scribes and priests reached this important stage between the oral tradition and the strictly written text. In his way they were able to turn their painted hieroglyphic books into running commentaries that we can, in large part, read and understand even today.