AS I SEE IT 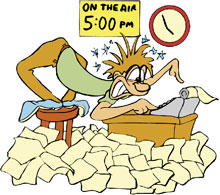 It is estimated that there are between ten and twenty million people who are residing illegally in the United States of America. They have come from many countries seeking the American Dream. Most are honorable people, but they are illegal nevertheless.

The problem has been put on the back burner for several reasons. During the recent presidential campaign, both the Republican and the Democratic candidates avoided the issue because they had proposed solutions that hinted at amnesty and that was a turnoff for many voters. Now, the economy has taken center stage, but the issue is still there, and should be dealt with, and soon.

The first option is to identify the illegals, round them up and send them back to where they came from. This would pose PR and logistical problems. Immigration police would be raiding homes at night. Parents would be separated from their children and taken to interment camps. Shocking photographs of the roundups would appear in newspapers all over the world. China, Guatemala and Mexico may demand proof of citizenship before they admit entry to hordes of displaced persons. Meanwhile, the US is housing and feeding these folks.

Another option is to occasionally kick out a few hundred illegals to impress the anti-immigrant voter, but never face the issue head-on with a comprehensive, workable plan. To leave the situation in limbo would create an under-class of residents who cannot legally seek employment. While most of these residents are resourceful and endowed with good commonsense, it was not the middle or upper classes that slipped across the Rio Bravo or the Canadian border. Without jobs or schooling, they will remain poor and unlettered, and eventually resort to criminal activity.

A third option is to grant them a conditional status. It could require immediate registration by each illegal now in the U.S. The registration form would include fingerprints and a signature. The form would have a permanent ID number. All registrations would have to be filed within a six month period. The applicant would acknowledge his illegal status and agree to pay a fine of $3,000.00, payable $300.00 per year for ten years. If ten million illegal residents agreed to pay the fine that would amount to three billion dollars a year for ten years.

These applicants would then apply for a tamper proof card with photo and finger prints. No illegal would be issued a card unless he had first obtained his ID number.

When a reasonable time had passed, severe penalties would be imposed on employers who hired anyone without a card. All illegals without their special SS card would be subject to deportation. Aliens holding provisional cards could work and have the same right to training and education as a citizen. A card would be revoked if the holder engaged in proscribed conduct, or failed to pay his fine.

A Social Security number is already needed when applying for a job or when dealing with the IRS. The only change suggested here is that a tamper proof card would be issued. The only time it would need to be presented is in connection with employment.

If the US opts to deport all or some illegals, so be it. But those that are permitted to remain must be given the opportunity to compete for jobs and education. To take no action would be the most disastrous option.