ORDER IN THE COURT? 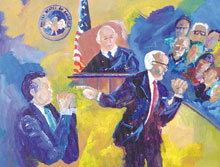 (Ed. Note: This is the third in a short series of columns about the author’s experiences over his long career as a prosecutor up in the “old country.”)

I developed a nagging toothache during a trial in Dover. It was a serious case because both Jim Liguori and Gary Traynor were representing the defendant. During one recess I confided in them and asked whether they knew a good dentist in Dover who might be able to quickly help me. Both recommended the same dentist, who was a golfing partner and friend of Liguori.

I waited only briefly before being let into the dentist office. His name was Chris and he was a friendly guy. He quickly led me to the chair and distracted by the pain, I noticed little. Chris began letting me slowly roll back in his chair. There, standing on both sides of Chris and behind me, were Liguori and Traynor. Each held a very, very long needle and syringe in their hands and they were pointing them at me. There was more than one way to skin a prosecutor! We all laughed out loud at the surprise and even my pain was momentarily forgotten. Chris then went on to do a fine job on the tooth.

Lawyers in Delaware fight hard in the courtroom but leave the fight behind when day is done.

Criminal defendants often have strange names, like Amir Fasadh and Amin Guy. During a seminar in Chicago, however, the presenter was claiming to have encountered the most outrageous name of all. I seriously doubted his claim, holding Amir and Amin up my own sleeve.

The presenter, also a prosecutor, told us that he had a trial scheduled and urgently needed one of his witness to appear. The witness’ name was “Zippity Doodah Day.” That, of course, brought some laughter from the seminar audience. The speaker went on to say that he called the witness’ home and his mother answered the phone.

The prosecutor then asked the mother if Zippity Doodah Day was available to discuss the case. In reply, the mother asked “Would that be senior or junior?” I knew I couldn’t top that one.

Doctor Inquito was an Assistant Medical Examiner in Delaware. He excelled at his work. However, because he was from the Phillipines, which he called the “Pillopines,” it was sometimes difficult to understand his testimony at trial. I was representing a defendant and Dr. Inguito testified to finding an autopsy that I hadn’t seen. Judge Vincent Poppiti was presiding when I asked the doctor “And where can that opinion be located in your autopsy protocol or notes?” Inguito quickly replied “It’s in my ropp drop.” I was confused.

“Where, in your ropp drop, can that be found?” I was treading lightly but the jury began to smile. “It’s on page two in the drop,” Inguito answered. Still confused, I asked, “Where is your ropp drop right now?,” hoping to flesh out the meaning of it all. Now, the jury was laughing out loud. Judge Poppiti, smiling the tightest of smiles, quieted the jury and then said to me, “Mr. Rambo, I think he means ‘rough draft’.”

(Footnote: Inguito also called a “gunshot wound” a “gunshit wound” but fortunately, I never repeated it that way.) 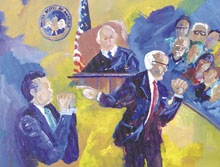