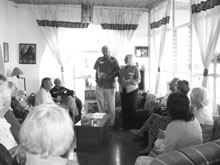 On March 1, I went to a Peace Corps pot-luck dinner hosted by Bob and Judith Terry. It was not only fun but highly interesting and it was probably the best pot-luck that could be had, too. There were about 14 people who had, at various ages and during a range of decades from 1961 - 2006, served in the Peace Corps in places like Honduras, Ecuador, Haiti, Macedonia, Iran, Iraq, Saudi Arabia, the Philippines and Poland. I have to qualify the foregoing by adding that a few of these people had served in more than one location, usually on a two-year contract following intense training.

After a wine chat to get acquainted since few of them had ever met, they sat in some semblance of a circle and talked about their experiences. Two hours passed in a flash.

How would you like to have been in Iran when all hell was breaking loose? There were tense times while those at the US embassy were held prisoner for too many days until, at last, the Canadians organized a bold plan and rescued them. Joining hands to improve the world we share made us at home very proud. So, yes. Being a member of the Peace Corps can carry risk in turbulent times and volatile locales, but it is nothing like being a journalist sent to cover the turbulence. In fact, the Peace Corps is very protective of their volunteers, I learned.

For the majority of Peace Corps members, their jobs were at the grass roots, effecting change through empowering the common people in developing countries with education of one sort or another.

Some taught English. Some taught the locals how to run businesses or institute agricultural programs, simultaneously taking in children whose families were destitute. One interacted with weavers —yes, the old-fashioned weaving we sometimes see here Lakeside—and helped in every aspect of their daily lives. All of them worked within the local culture.

As each told their stories, they included episodes that made us laugh, mostly at our own human limits. But all of them had been permanently touched by the bonds they had formed with people who, at heart, were no different from us.

I often hear people who have retired Lakeside and have also lived overseas say that they are no longer comfortable in the US. Some cite the pace of life, others corruption, and still others merely point to the difference in the cost of living. Peace Corps volunteers are regular people whose skills contributed to the quality of life in other countries. With the US once again building projects like the Peace Corps, there is a resurgence of overseas opportunities.

Retirement people, especially, are in demand—skills, experience, perspective—and Mexico, for one, has flung open the door to those opportunities. Keep your eyes open for programs about their continuing efforts to make a better world. You may be able to help and enrich your own life at the same time. 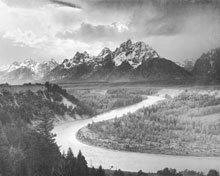