Ken Masson has been playing, teaching and writing about bridge for 35 years. Originally from Dublin, Ireland, Ken has been living in Toronto since 1967. He and his wife and bridge partner, Rosemarie, are now in their third year wintering in Lakeside.

General guidelines for bidding small slams suggest that the combined strength of the two hands should be around 33 points. This deal proved that slam is possible on a lot fewer points if the hands fit together particularly well.

The hand was played at the Lake Chapala Duplicate Bridge Club and produced a satisfying result for one partnership. South opened 1 spade and after North responded with a game-forcing 2 diamonds, South rebid 2 spades to show at least a six-card suit. North considered that his hand was a minimum in the context and bid 4 spades.

South felt that if partner held the “right” minimum, slam might be makeable so he bid 5 diamonds to show first-round control in this suit. North concluded that partner would not have tried for slam missing first round control in three suits: spades, hearts and clubs. Holding the spade Ace, the club Ace and the diamond King and Queen, North felt that all her values were working and jumped straight to 6 spades.

The play was simple. West led the club Jack which declarer won in hand to lead a spade to dummy’s Ace. When North now called for the spade 6 and East produced the 10, South covered with the Jack and when that held, the spade King captured the Queen and South ended up with an overtrick.

Note that it would not have helped South to use Blackwood on this deal. The bid of 4 No Trump over 4 spades would have asked North to state the number of aces she held. If North had responded 5 hearts to show two aces, South would not know which two aces they were. One of the aces might have been in hearts which would have been a waste to South and if the spade Queen were in the West hand, a hopeless slam could have been bid. 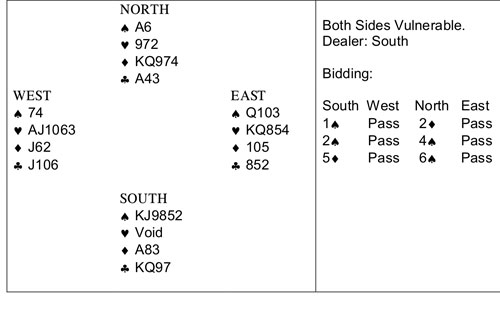