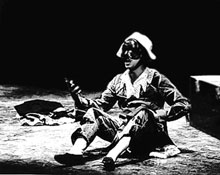 Improvisational theater descended from Commedia dell’ arte in 16th Century Italy. There were two venues for paid actors: the church and the aristocracy. So theater was limited in subject matter and audience. Church productions were passion and moral plays and performances before the aristocracies were most certainly “class correct”—the servant never got the better of the master.

Eventually actors performed any place else they could make a living. Outside the law, outside the church, they were alive in the laughter of the people—and that laughter was their religion and their law. Their topics were neither moral nor politically correct. When the commedia players rolled into town they quickly sought out local scandals, current events, the affairs of state and inserted recognizable names in their material. Satirizing recognizable figures and events was the meat of their performances.

Of course the actors incurred the scorn of the church and state and no doubt were jailed for provocative acts, disrupting the peace and corrupting the morals of the people. Sounds like fun, eh?

Today modern improvisational actors enjoy much more freedom and say things that are offensive, inappropriate and beyond the pale of good taste sometimes. As I like to say in a show’s warm up “We apologize to anyone who might be offended by tonight’s performance. If we didn’t offend you, I also apologize for the group. We can’t get to everyone.”

One of the questions I get most is: “Hey, if you guys are improvising, how do you rehearse?” Good question. Basically we practice at freeing our minds of pre-conceived ideas, trusting our instincts, not judging what comes out of our mouths and adding to what is created already. Sounds easy? It isn’t. In improvising you are forced to become yourself.

It is hard enough that an improvisational actor directs, writes and choreographs his presence on stage, but he or she has another actor on stage that is likewise doing the same thing. They have to cooperate to make the scene work. Unlike drama and conflict, the aim of an improvisational scene is to get along and not argue. The actor must subordinate himself to the demands of his fellow actors, while giving his own abilities full freedom. His task is to control that freedom. Characters are worn very lightly in improvisation.

An improv actor can never say, “My character wouldn’t say that.” Your role is to justify spontaneously the action or words of others before you. Now the bad news. Whereas a stage actor expects their performance to be good nine times out of ten, a good improvisational performance is six out of ten. Two out of ten, it’s stinky. Failure is an option for an improvisational actor at all times. But…one is most imaginative and improvises most audaciously when in the heat of danger.

But when you hit the punch line and bring down the house with laughter, there is not a greater feeling in the world. You and the audience are sharing the creation at the same instant, both experiencing the intimacy of the moment. You both are in on the joke.

A good improv actor needs to be: loud, fearless, apolitical, trusting, chivalrous to the other actors on stage, clever, a good listener and a smart ass. Notice I didn’t say funny. Improvising is not telling jokes or trying to act funny. It will be funny if you trust in yourself and the other actor on stage. Night after night, actors go out alone on stage armed with only their own imagination and creativity and try not to fall off that high wire. Comedy without nets.