Ken Masson has been playing, teaching and writing about bridge for 35 years. Originally from Dublin, Ireland, Ken has been living in Toronto since 1967. He and his wife and bridge partner, Rosemarie, are now in their third year wintering in Lakeside.

One of the challenges of teaching bridge is persuading students of the power of distribution and to count dummy points when they expect their partner to become declarer in a suit contract. To calculate dummy points, a player allocates one point to a doubleton, 3 points to a singleton and 5 points to a void in a suit other than trumps. Once they have accepted this principle, I find their bidding and results improve enormously.

In this month’s hand, played on one of the popular Internet bridge sites, North opened in first seat with 1 club. East passed and South responded 1 heart. West passed and North rebid 2 hearts. That ended the auction.

West led the diamond Ace and, seeing a singleton in the dummy, switched to a trump. East took the Ace and continued trumps but now declarer was in control, losing only one more trick to the spade Ace to emerge with 10 tricks. This was not a successful hand for North South as they stopped in a part-score while game was available.

So what went wrong? The fault lies mainly with North who failed to see the value of his singleton diamond. When South bid 1 heart, North’s hand instantly became stronger and he should have added 3 dummy points to his 13 high card points for a total of 16 points and thus his rebid should have been 3 hearts. With 9 high card points of his own, South would most likely have gone on to game.

To test the validity of dummy points, take the spade 2 from North’s hand and make it the diamond 2. Now, North would still open the bidding but when South bids 1 heart, North’s hand is only worth 14 dummy points and so he only rebids 2 hearts. Thus a hopeless heart game would be avoided. 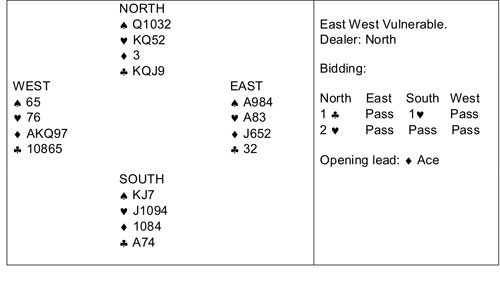 Ajijic Society Of The Arts